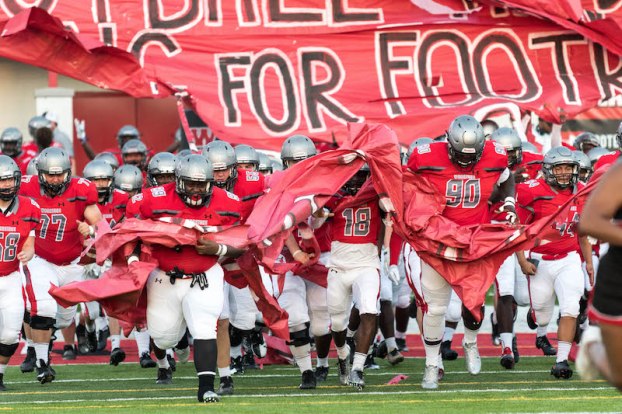 Thompson stayed at No. 3 in the most recent 7A top 10, which is just one spot behind one-loss Hoover at No. 2. (Reporter photo/Neal Wagner)

While preseason football rankings mean absolutely nothing, they seemed to hold true through at least one week of the football season as very little change was seen in the Week 1 football poll released by the ASWA on Tuesday, Aug. 29.

Four Shelby County teams graced the preseason rankings released a couple of weeks back and after the completion of the first week of high school football, all but Montevallo remained in the exact same spot where they started the season.

Despite very little change, there is still plenty to break down in the first rankings released since the 2017 season officially got under way on Friday, Aug. 25.

Starting in 7A, Spain Park and Thompson were the only two of the four county teams ranked that actually opened their season on Aug. 25, as Montevallo had a bye week and Briarwood traveled to Vestavia for a jamboree.

It didn’t look good early as the Warriors found themselves down 17-0, but they eventually got both sides of the ball clicking and outscored Hapeville 21-3 from the end of the second quarter to the end of the game behind 329 yards passing from junior quarterback Taulia Tagovailoa.

They went on to win 21-20 to start the season 1-0 when Hapeville’s field goal late in the fourth hit off the upright. In the preseason standings, Thompson sat behind Central-Phenix City (No. 2) and Hoover (No. 1).

Hoover fell 35-26 to Grayson (Georgia) High School and also fell one spot in the rankings to No. 2. Central-Phenix City replaced the Bucs by taking over the top overall spot in 7A, but Hoover’s one-spot fall wasn’t enough for the Warriors to make the leap to No. 2 despite the win.

Spain Park also picked up a convincing win in game one, taking down Gadsden City 31-19 thanks to D’Arie Johnson and Jalen Henderson both running for more than 100 yards on the ground.

While the Jags had room to move up due to Hoover’s loss and two teams in front of them, Hewitt-Trussville and James Clemens, not even starting the season — they still remained at the No. 7 position heading into week two of the season.

Despite staying in the same position, Spain Park looked like the most solid county team in week one and will have plenty of time to soar up the rankings if they keep performing like they did in the opening game.

Briarwood competed in a jamboree at Vestavia during the first week of action and didn’t show much in the way of offense as they lost to the Rebels. While that was the case, the story of the game had nothing to do with their performance, but instead the ability to make Vestavia’s Jake Pratt’s dream come true.

The Lions and Rebels worked together to help Pratt, a senior with down syndrome, score a touchdown late in the game. Both teams came together and celebrated after Pratt sprinted up the near sideline for the touchdown.

Now, Briarwood will turn its focus to Chelsea this Friday night and look to defend their No. 2 ranking in the 5A classification.

Montevallo was the only team to improve its ranking in the first regular-season poll of the season after making the massive one-spot jump from No. 5 to No. 4.

The Bulldogs did so by not even stepping on the field during the first week of the season. The controversial and interesting thing is they jumped over Gordo, a team that beat them 56-21 last year, but lost its opener to Fayette County 18-14.

Over the last three weeks, I’ve said this could be the year Montevallo overtakes Gordo for the region crown and if the Bulldogs make a statement in their first region game against West Blocton, they could make others think the same thing.