Westminster hosts first Round Up event 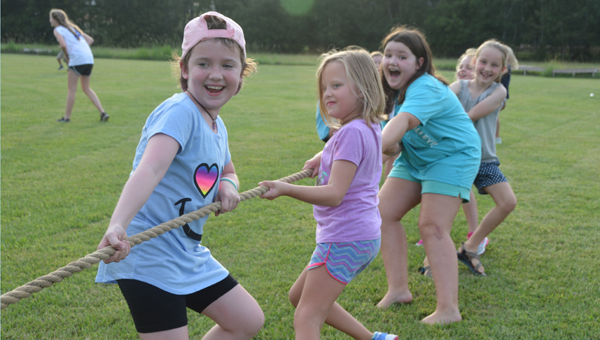 Kathryn Marbutt and others play tug-of-war during Westminster School at Oak Mountain’s Back to School Round Up on Friday, Aug. 25. (REPORTER PHOTO/STEPHEN DAWKINS)

NORTH SHELBY – Westminster School at Oak Mountain’s inaugural Back to School Round Up brought together the school community.

More than 650 people attended the event, which was held on Friday, Aug. 25, at the Upper School campus, Events Coordinator Megean Carter said.

“We had great participation from our Upper and Lower schools,” Carter said. “The weather was great, and I feel like God blessed us with a great event. It was encouraging for the first year.”

School officials saw a need to have a school-wide event and developed the idea for the Round Up during the spring, Carter said.

About 30 volunteers helped with the event, with tasks ranging from parking to collecting meal tickets.

Attendees could purchase meal tickets in advance for barbecue ($8) or hot dog ($5) plates.

Steel City Pops were also sold at the event.

Officials plan to continue the event in the coming years, Carter said.