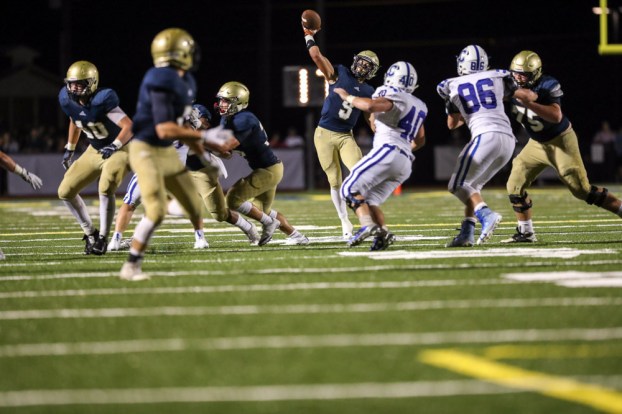 Briarwood's J.R. Tran-Reno fires a pass down field late in the fourth quarter to Carson Eddy, who caught his third touchdown of the night. (For the Reporter/Todd Kwarcinski)

NORTH SHELBY – With the student section chanting the now infamous, “I believe that we just won” chant and the last few seconds of the clock ticking off at Lions Pride Stadium on Friday night, Sept. 1, it could only mean one thing, that Briarwood was about to knock Chelsea off for the first time in four years.

Up 19-7 as the final second ticked off, the student section broke through the chain-linked fence separating them from the players and a party ensued on the middle of the Lions new turf field.

“They’ve got such a good program over at Chelsea and that’s a testament to coach (Chris) Elmore who has made them so hard to beat, but thankfully tonight, we were able to get one,” Briarwood head coach said with a big smile on his face after the game.

While Michael Hiers got his first start at quarterback for the varsity squad and his two touchdowns to Carson Eddy were spot on, it was starting running back and backup quarterback J.R. Tran-Reno that sealed the game with a 33-yard touchdown pass to Eddy for his third TD catch of the game.

It was a fourth and four from the 33-yard line and coming out of a timeout, the Lions put Tran-Reno in a quarterback. The play initially looked like a wildcat run by the junior running back as he and Eddy sold it perfectly, but at the last second you could see Eddy slip up the near sideline past the defense and Tran-Reno hurled the ball 33 yards for an easy touchdown to put Briarwood up 19-7 with 4:41 left to play. 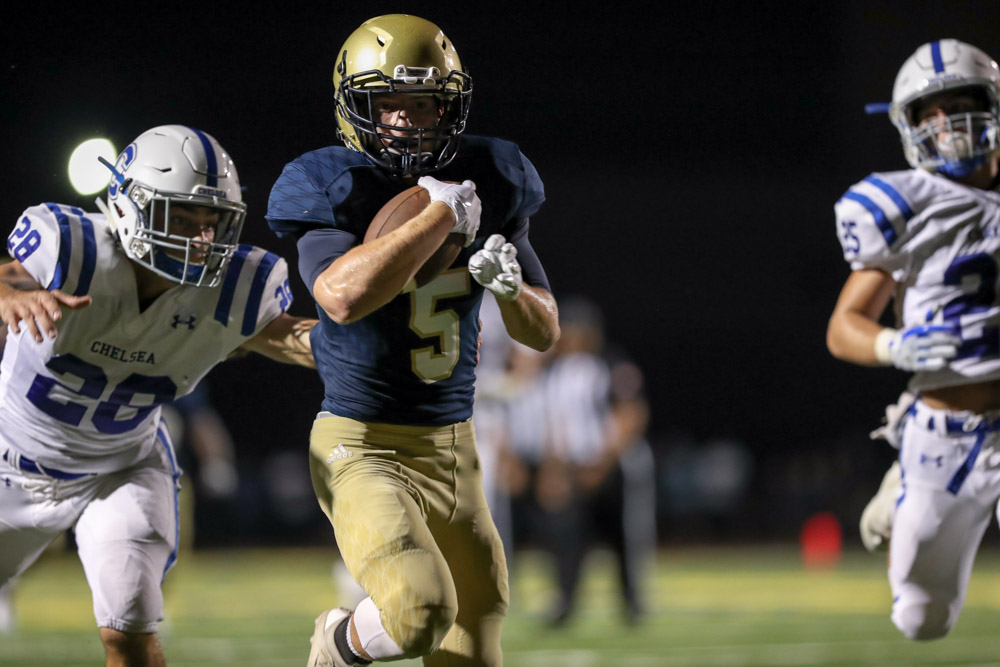 Eddy catches his third touchdown pass of the night.

“We actually haven’t practiced that play,” Tran-Reno said after the game. “We just drew it up during that timeout and it just kind of happened. We preach selling the run, so that was my initial job during that play.”

The game started out rather sloppy as both teams had multiple turnovers in the first quarter, but each responded as the game continued.

After a scoreless first quarter, Briarwood was finally able to put something together midway through the second quarter. The Lions faced a second-and-18 from the Chelsea 23-yard line after Hiers was sacked in what looked to be a drive killer, but one play later, Hiers found Eddy streaking up that same near sideline on the opposite end of the field for a 25-yard touchdown.

The beautiful pass that led Eddy right to the end zone capped off a 13-play, 51-yard drive that took 4:39 off the clock. After the PAT was missed, Briarwood held a 6-0 lead, which it took into the half.

“Eddy is just tough little boy,” Yancey said of his stud wide receiver. “In every way, he is tough great athlete.”

Coming out of the break, Chelsea ran 10 plays but only picked up 15 yards in those 10 plays before being forced to punt it away to Briarwood.

The Lions took control on their own 36-yard line and picked up right where they left off in the first half. A hold set them up with a first and 20, but on third-and-13, Hiers found Tran-Reno wide open over the middle of the field for a 25-yard gain and big third down conversion. 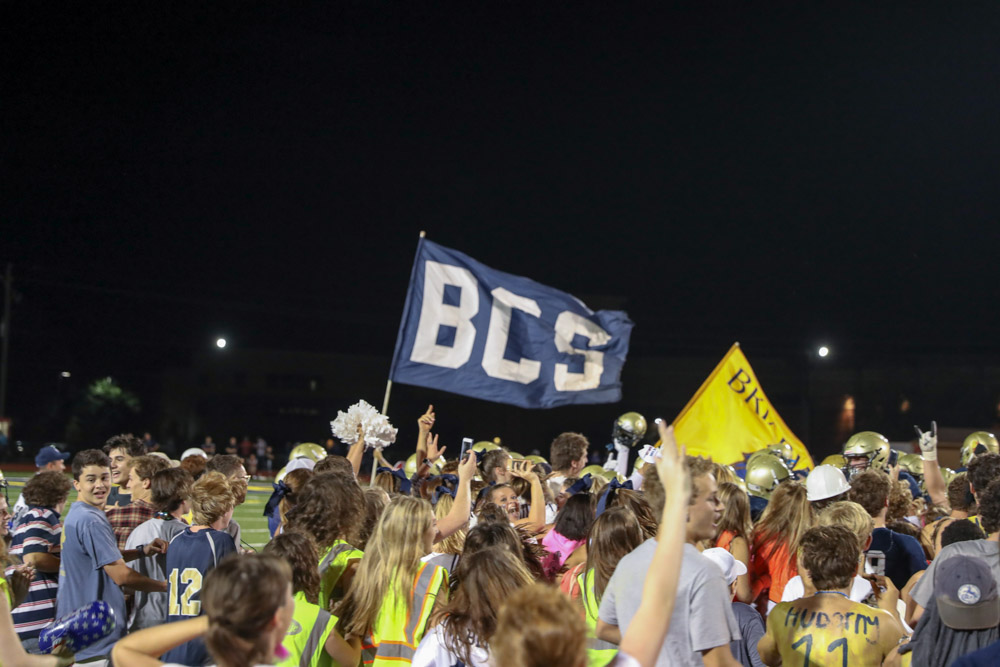 Hiers made another key throw to Eddy shortly after before reeling off several big runs in a row before the Lions found themselves in a first-and-goal situation from the 8-yard line.

Another penalty set them back again as they lost 10 yards, but on first down from the 18-yard line, Hiers fired another deep pass to Eddy, who must be invisible because he stood wide open in the end zone with nobody in sight. His 18-yard touchdown catch was the second length catch of the game.

“He’s such a playmaker and when you have playmakers you give them the ball,” Tran-Reon said of Eddy’s ability at receiver.

Briarwood failed a two-point conversion, but held a 12-0 lead with 1:21 remaining in the third after its 14-play, 64-yard drive.

It was go-time for Chelsea’s offense that hadn’t found a rhythm yet through almost two games, but that was about to change.

The Hornets answered with a 14-play drive of their own as they went 71 yards in 3:48 to cut the lead to 12-7 with 9:32 left to play. The drive was capped off by a beautiful pass from Turner Griffin to Lando Nichols for 22 yards.

“There’s moments like that where we’re doing some good things on offense,” Chelsea head coach Chris Elmore said. “But we just haven’t been able to put it completely together offensively.”

Briarwood went on to score for the third drive in a row on their ensuing possession, which was capped off by the Tran-Reno pass to Eddy.

On the night Tran-Reno ran for 93 yards and threw one touchdown, while Eddy was close to 100 yards receiving with three touchdowns.

The 19-7 win redeemed Briarwood’s 43-15 loss a season ago and snapped their three-game losing streak to the Hornets, but it was more about starting faster in 2017 for Yancey and the team.

“I’m not sure how this relates to last year, but for this year it’s a reward for the boys that wanted to get off to a much faster start than we did a year ago,” Yancey said.

Briarwood will travel to Moody next week as they open region play as the defending champs, while Chelsea travels to take on a very good Wetumpka team as they look to avoid an 0-3 start.

By Chris Megginson | For the Reporter PELHAM – Brandon Sledge scored all four touchdowns to carry the Pelham Panthers... read more