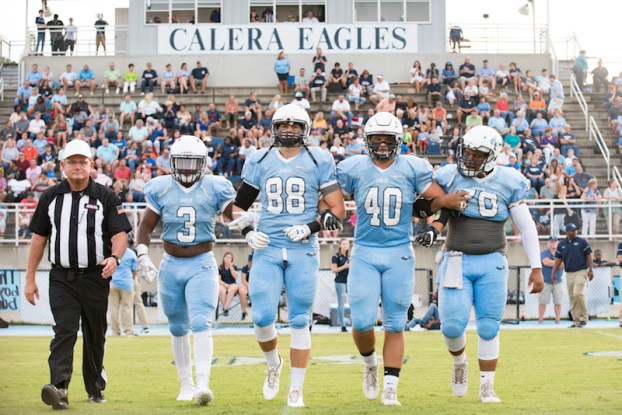 Calera rebounded after its opening-night loss by defeating Bibb County 25-12 to improve to 1-1 on the season. (File)

CENTREVILLE – Week one of the 2017 season featured a tough, heartbreaking 29-27 loss to Mae Jemison as Calera didn’t seem like a team that was returning a lot of offensive and defensive talent, but in week two on Friday, Sept. 1, the Eagles used a much more balanced attack to even their record at 1-1 after taking down Bibb County 25-12 on the road.

Last week saw an offense that seemed one dimensional only running for 52 yards, and a mistake-prone defense, but in their most recent outing, the Eagles put up 304 total yards after running for 124 and passing for an additional 180.

“We needed that,” head coach Andrew Zow said after the rebound win. “Our kids will hopefully get better and learn from that game tonight. We didn’t play the best we could, but we made some good plays on both sides of the ball and that’s what we needed.”

It started out a bit worrisome for Calera when they went three-and-out on their opening drive. Bibb County took advantage and started the game with some trickery by calling a halfback pass for an 85-yard touchdown on their first offensive play from scrimmage.

“They hit us early with that big bomb because they knew how aggressive our safeties were and that we would be cheating up on the play,” Zow said. “Our guys just bit on it and it led to an easy first play for them.”

The defense recovered, however, and only gave up 113 total yards the rest of the game holding Bibb County to just 35 rushing yards and 163 yards through the air.

“Defensively we made so many more plays tonight and were much more fundamentally sound,” Zow said. “There were still a few mistakes, but much improved from last week.”

Calera answered back shortly after with a 14-yard touchdown pass from Quad Brown to Dee Woodson. After the PAT was good, Calera had jumped in front 7-6.

It looked like the Eagles would extend that lead after a blocked punt late in the first quarter, but too many men on the field led to a first down for Bibb County and they took advantage by driving down the field to take the lead back at 12-7.

Calera clearly didn’t like being down 12-7 as they woke up on both sides of the ball and put the clamp down for the remainder of the night.

On the Eagles’ ensuing possession, Brown found Chandler Smith after a nice drive for a 16-yard touchdown pass to give Calera the lead right back at 13-7 after a missed extra point.

Jermain Wilson stepped up defensively on Bibb County’s next drive intercepting the ball at the Choctaw 15-yard line. It didn’t take long before Terry Burrell barreled his way into the end zone for a 1-yard TD to extend Calera’s lead to 20-12

It looked like Bibb County had a bit of a spark after when they returned a kickoff to the house, but a block-in-the-back brought it all the way back to the 4-yard line and a fumbled snap on the next play led to a safety to make the score 22-12.

The Choctaws got more good fortune when they recovered an onside kick after the safety, but yet again that good fortune was followed by misfortune as they fumbled the ball on the second play of the drive. Calera took advantage and tacked on another field goal before the half to make the score 25-12 at the break.

Both defenses, particularly Calera’s, looked much improved after halftime adjustments leading to a scoreless second half and the final score of 25-12 as Calera moved to 1-1 on the season.

“It’s good for momentum moving forward,” Zow said. “We came out of the game last week and felt like we should have won so being able to bounce back and play at a decent level was important. We’ve got weapons on both sides of the ball and we just haven’t jelled yet, but man what a game to bounce back and win like that.”

Zow said he didn’t score as many points as he would’ve liked, but that will come with time. The Eagles picked up their fourth consecutive win over Bibb County and will kick off region play next week with a matchup against Dallas County at home.

By ALEC ETHEREDGE | Sports Editor NORTH SHELBY – With the student section chanting the now infamous, “I believe that... read more