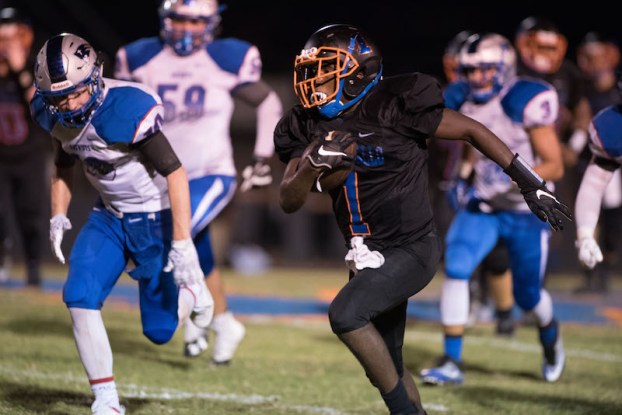 Daqwan Bryant, pictured in a game last year, apparently broke a bone early in the game. Thoughts and prayers go out to him and his family. (File)

“West Blocton is a tough team. We knew they weren’t going to go away and we’d have to play a full 48 minute, and we did,” said Brandon Wilcox, Montevallo head coach. “I’m really blessed to leave a road trip game against a quality opponent with a win. We’ve got some stuff we’ve got to clean up, and some good tape to watch. If our kids will humble themselves and continue to be hungry, we’ll be a good football team down the road.”

A 12-yard Demetrius Smith touchdown run put the Bulldogs on the board, 6-0, with four minutes remaining in the opening quarter. Junior quarterback Jay Sullens opened the second quarter with a 40-yard touchdown pass to Davion Gilbert, followed by a 2-point conversion to extend the lead to 14-0.

The Tigers got on the board with nine minutes to play in the first half, as Curtis Wright hit Keontae Taylor for a 22-yard touchdown pass. The point after kick was no good. Montevallo was driving again, but West Blocton picked off a pass at its own 11 with five minutes to go in the first half.

The two teams traded interceptions in the third quarter around the West Blocton 40-yard-line to close the third and open the fourth quarters. The Tigers pushed down into the Montevallo red zone before fumbling and giving the ball back to the Bulldogs at their own 20 with eight minutes to play. Once again, West Blocton took it away on an interception at midfield.

Montevallo got one more takeaway, recovering a fumble with three minutes to play.

“I was really proud of our defensive line. I thought they stood tall tonight and played in the backfield most of the night. I was proud of the way we ran to the ball. The defense kept us in the ballgame all night. When our offense was struggling the defense continued to make plays and kept us ahead,” Wilcox said.

West Blocton recovered the onside kick and moved deeper in Montevallo territory with the help of penalties, but the Bulldogs held in the end.

“We had to stop them a bunch of times the last minute of the game to keep them out of the end zone,” Wilcox said. “I was proud of my guys finding a way to win.”

Sullens finished the night with 183 yards of total offense. He rushed for 99 yards on 22 carries and was 7-of-16 passing for 84 yards and three interceptions.

Boston Bush led the defense with eight solo tackles, two assists, a forced fumble and fumble recovery, while Smith played a part in six total tackles, posted one sack and had three quarterback hurries to go along with his 28 yards rushing on offense.

For the second-straight year, Montevallo lost a player in Week 1 to a broken bone. Daqwan Bryant suffered an injury in the first quarter and was joined on the field for support by former teammate Ahmad Edwards, who now plays for Thompson High School. Edwards suffered a similar a broken leg in week one against West Blocton last season.

Montevallo (1-0) will travel to American Christian Academy in Tuscaloosa on Friday, Sept. 8.