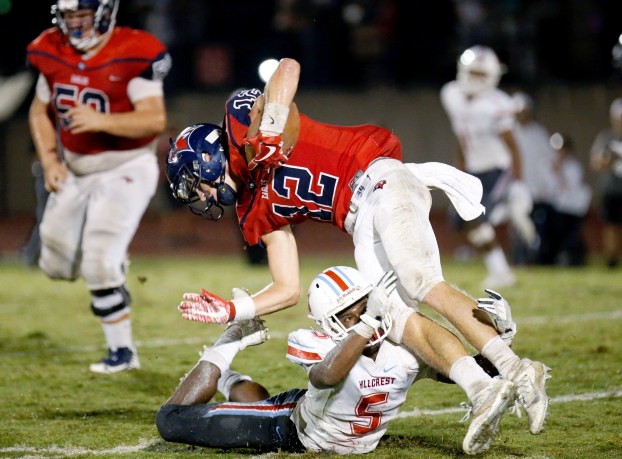 Oak Mountain was able to hold off Hillcrest-Tuscaloosa's 2-point conversion for the win late in the game to preserve a 28-27 win over the Patriots. (For the Reporter/Brandon Sumrall)

Oak Mountain hangs on to win thriller, improves to 2-0

BRANDON SUMRALL | Special to the Reporter

NORTH SHELBY – Ali versus Frazier, Leonard versus Hearns, Bowe versus Holyfield, all historic battles that have stood the test of time. Friday nights battle between the ninth ranked Hillcrest Tuscaloosa Patriots and the Oak Mountain High School Eagles may well be added to that list of epic fights.

A heavyweight fight from the opening kickoff to the final whistle saw plenty of action and lethal blows by both squads, but it was be the homesteading Eagles that dealt the final blow to escape with a 28-27 win over the Patriots.

Cagan Campbell wasted little time in throwing the game’s opening haymaker by fielding the opening kickoff at his own 11-yard line and blasted through the Eagle kickoff team to go eighty-nine yards for a touchdown. With Joseph Gannon adding the PAT, Hillcrest lead 7-0 just thirteen seconds in to the game.

After an opening drive fumble by the Eagles and a three and out by the Patriots, Oak Mountain began its second possession of the night at their own ten. A 12-yard run and 20-yard run, both by Connor Wilson, moved the ball out near the forty and set the tempo for the drive as Oak Mountain pounded its way down inside the Hillcrest red zone. Facing a forth and five at the Patriots sixteen, quarterback Connor Webb connected with Carson Bobo for a big first down at the seven and again found Bobo on the next play but this time it was for six. With Christian Hoods’ PAT up and through, the game was tied at seven with 2:12 to play in the first.

A pair of scoreless possessions by both teams gave way to a 60-yard scoring drive by the Patriot offense that was capped off on a 1-yard touchdown carry by Hillcrest running back Nassir Boyd to put the Patriots out in front 14-7.

The ensuing Eagle possession came up short on fourth and two at the Patriots 25-yard line and turned the ball over on downs with 1:33 to play in the first half.

Seventy-Six yards and 1:33 proved to be no problem for quarterback Colby Smelley and the Patriot offense as they took to the air and capped the drive with a 22-yard touchdown pass from Smelley to Ernest Ross to take a 21-7 lead to the halftime break.

A pair of scoreless possessions to start the second half set Oak Mountain up with their second possession of the third quarter and saw the Eagles march 72 yards while capping off the drive on a 3-yard touchdown carry by Ethan Duncan that cut the Hillcrest lead to seven, 21-14 with 2:51 to play in the third.

The Patriots looked to be in fine position to answer the Eagles score, but a Hillcrest fumble on a second and seventeen at the midfield stripe was be scooped up by Jackson Murphy and returned 50 yards for an Oak Mountain touchdown. However, a missed PAT left the Eagles trailing by one with 11:38 to play in the ballgame.

Still trailing by one and with 4:02 to play, Webb brought his team to the line at their own 35-yard line.

A 32-yard pass from Webb to Nathan Jones along with a 31-yard pass to Carson Bobo and a penalty against the Patriots moved the Eagles down inside the Hillcrest red zone with 3:08 to play.  A first and goal on the two saw the Eagles gain one yard, but a second and goal at the one saw Luke Percer find the end zone and with Percer also adding the two-point conversion, Oak Mountain held a 28-21 lead with 2:06 to play.

The Patriots proved in the first half their ability to score quickly and as Smelly settled under center at his own 10-yard line with just under two minutes to play a heightened level of poise come across the Hillcrest sideline.

Fifteen yards from Smelley to Boyd, completions of 36 and 23 yards to Terry Beverley moved the Patriots down inside the Eagles red zone with 0:59 to play. Another completion to Beverly moved the ball down to the eight where a 7-yard run by Boyd made it first and goal at the one with 0:23 showing on the clock.

First down resulted in no gain for the Patriots and after a quick time out Hillcrest lined up for a second and goal play that resulted in a 1-yard touchdown carry by Smelley to cut the lead to one with just 0:19 to play.

A quick call from the sideline saw the Patriots line up for the two-point conversion but the choice to go for the win was a costly one as the Oak Mountain defense lowered the final knock-out blow and after a recovered onside kick the Eagles escaped with a 28-27 win over the Patriots.

“We didn’t come out very well in the first half. They hit us in the mouth in the first half and I didn’t think we responded very well,” said Oak Mountain Head Coach Cris Bell, “Offensively we shot ourselves in the foot and missed a couple of reads that cost us. Defensively we showed a lot of composure and character in the second half. I am very, very, proud of  the way that we competed. It is who we are. These guys like to live on the edge a little bit.”

Webb finished the game with a 12 of 14 passing performance with 155 yards and a touchdown. Bobo hauled in five receptions for 71 yards, while Connor Wilson lead the ground attack with 65 yards on eleven carries.