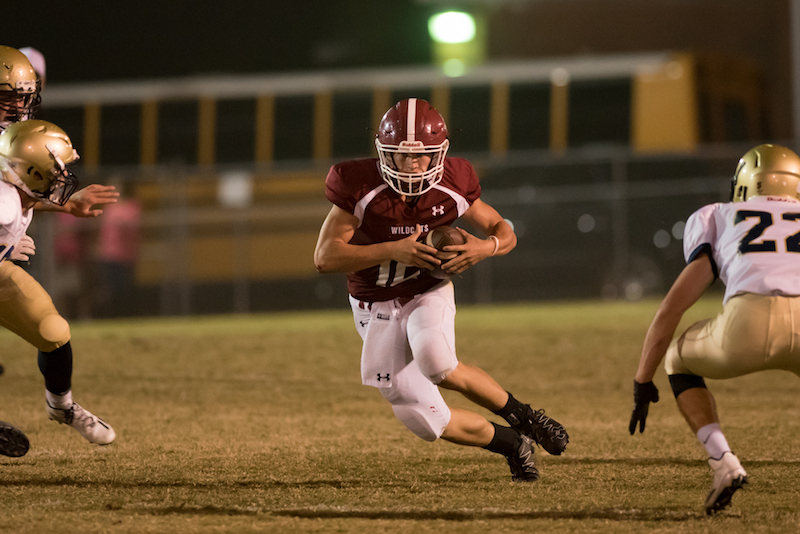 COLUMBIANA – Last year, the Shelby County Wildcats opened the season with 49 points in a win over Holt and topping that seemed far-fetched in game one of the 2017 season as they would have to score 50 points or more, but it wasn’t out of the realm of possibility as the Wildcats started the season with a 51-8 win over Holt on Friday, Sept. 1, to move to 1-0 for the third year in a row.

“It felt good to start that way offensively,” head coach Heath Childers said. “We did a lot better executing this week than we did in the jamboree last week with Childersburg. We played so hard and I’m really proud of their effort.”

That jamboree he speaks of was a 20-14 loss last week to Childersburg, but with a strong returning core on the offensive side of the ball, Childers knew the offense would show up ready to play this week.

The Wildcats didn’t disappoint their coach as they came out on fire offensively scoring 31 first-quarter points to take a quick 31-0 lead.

Coming into the game, Shelby County was a heavy favorite after beating this steam 49-12 last year and facing a Holt team that had only won four games in the last five years.

That 31-point cushion was all the Wildcats needed as they added 14 more in the second quarter and six more in the third for the final score of 51-8.

The reason for the offensive explosion was a strong running game that totaled 314 yards. Tyrese Goodman led the attack on the ground rushing for 79 yards and one touchdown in the game.

Austin Lucas also had a nice game out of the backfield rushing for 63 yards and one touchdown, while Trent Sullivan added 42 yards, two touchdowns and a two-point conversion.

Chadwyn Russ finished with 54 yards passing, including a 41-yard touchdown pass to Greg Oliver. In all, six different Shelby County players scored a touchdown on the night for a balanced attack.

“The offensive line did a little bit better job of executing tonight and the running backs did a better job of finding the crease and hitting the hole,” Childers said of the strong offensive performance.

While the offense was the story, coach Childers came into the year with more question marks surrounding his defense and is pleased with how they’ve performed in the early going.

“I think so far this year, our defense has played really well and definitely looks improved a great deal from last year,” he said. “We’re tackling better and running to the ball better, which are the two things you have to do to be a good defense.”

It’s the third straight year the Wildcats have started the season off 1-0, which creates a momentum boost.

“It’s a real good thing to start off 1-0,” Childers said. “We won this game last year and got some momentum and were able to sneak off a win the next week.”

That next week’s opponent was a good St. Clair County team that they will take on again in week 2 this year and coach Childers know they need to take it one game at a time.

“We have to take it one game at a time which I did a poor job of last year, which caused us to stumble in the middle of the season,” he said. “We just have to continue to work and improve because we play a really good team this next week and are in a very difficult region.”