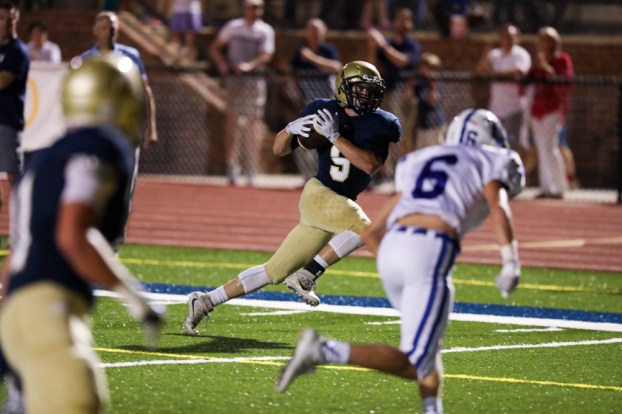 Briarwood has moved up to No. 1 after spending the previous two weeks at No. 2 thanks to a win over Chelsea to start the season and a Beauregard loss. (For the Reporter/Todd Kwarcinski)

Briarwood No. 1, 3 others remain ranked in latest poll

All it took was one week for the Briarwood Lions to make the leap up to No. 1 in the 5A classification after taking down 6A Chelsea 19-7 on Friday, Sept. 1, while also getting some help from Beauregard—who was the previous No. 1 team—as they lost 34-31 to Greenville to open the season.

Briarwood’s win over Chelsea wasn’t the prettiest due to offensive struggles and turnovers early, but the Lions played exactly the way they needed to in order to pick up a win in game one. The defense, which is expected to be one of the best in 5A, didn’t disappoint in the opener dominating from start to finish even when faced with short-field situations.

The offense, however, had some growing pains and still has some improvements to make. It’s scary to think how impressive they can be if the offense starts playing up to the level it did a season ago or better. Even with their struggles at times, mainly early in the game, Briarwood had a running back in J.R. Tran-Reno run for 96 yards and a receiver in Carson Eddy go over 100 yards receiving with three touchdowns.

The Lions look to be a solid pick at No. 1 for the time being, but after a matchup with Moody this Friday night, Briarwood gets a date with No. 6 Wenonah—who they beat 15-14 in the regular season last year, but who also knocked them out in the semifinals of the playoff on their home turf.

Thompson, Montevallo and Spain Park also remained ranked in the latest ASWA poll with all three sitting in the same position they did a week ago.

The highest of those three ranked teams is 7A Thompson, who still sits at No. 3 in the classification just behind 2-0 Central-Phenix City at No. 1 and 1-1 Hoover at No. 2.

The Warriors have a matchup with Tuscaloosa County on Sept. 8, which should be a win and will follow that up with a crucial game against No. 9 Mountain Brook.

Sticking in Class 7A, the Spain Park Jaguars remained No. 7 in the standings where they have stood in all three polls released during 2017 despite looking like the best team in the county through two games.

Nobody in front of them besides Hoover has lost, which has caused the consistency, but the level at which the Jags are playing at is undeniably good. Through two games they have scored 71 combined points and given up just 26.

Last year through two games, Spain Park had scored a combined 56 points and given up 35, showing their improvement in 2017. The biggest surprise is defensively, considering that was the Jags’ biggest worry spot in the offseason, but early on it looks like one of the best units in the state, which adds the perfect combination to their already potent offense.

An important stretch is on the horizon for the Jags, however, as they have three consecutive area games against Vestavia, Hoover and Mountain Brook that could determine their playoff fate before we even get out of September. We’ll find out how good this team is over the next three weeks.

Montevallo moved up from No. 5 in the rankings to No. 4 last week, which is where the Bulldogs reside again this week after a 21-14 win over West Blocton on the road to start the season.

The Bulldogs have some very winnable games over the coming weeks and should only rise up the rankings unless an unforeseen team shocks them at some point.

Oak Mountain also received votes in the 7A classification after their 2-0 start to the season.

By ALEC ETHEREDGE | Sports Editor While preseason football rankings mean absolutely nothing, they seemed to hold true through at... read more