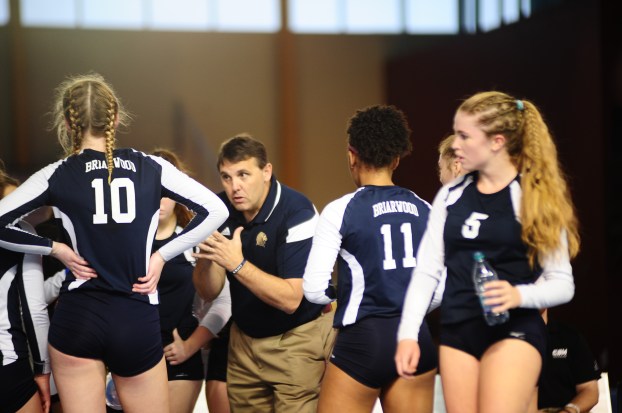 Briarwood’s volleyball team got off to a 2-4 start with wins over Northridge and Clay-Chalkville and losses to Gardendale, Ramsay, Geraldine and McAdory. (File)

Briarwood volleyball off to 2-4 start

Briarwood had an interesting 2016 volleyball season going through some tough times in the middle of the year, but rebounded to make a run to the Elite 8 of the state tournament at the Birmingham Crossplex last October.

Briarwood won its area championship with a 3-1 win over Moody before reeling off two more wins in the South Super Regional to make its way to Birmingham for the state tournament.

The Lions lost 3-0 to Lawrence County in their first match of the tournament, but got a valuable experience under first-year varsity head coach Jeff Robertson, who has already revived this program heading into 2017.

That 2017 campaign got underway on Thursday, Aug. 31, against Gardendale and continued throughout the weekend as Briarwood hosted the Serve Off Tournament on Saturday, Sept. 1, featuring 16 different teams.

The Lions opened their new season with a tough 3-0 loss to Gardendale, but didn’t lose any set by more than three points. The Rockets took the first set 25-23, the second set 24-26 and the final deciding set 25-22, to win a hard-fought battle between the two teams.

It was a trend that continued into the tournament Saturday as Briarwood lost three more tough matches, but was able to win a set against every team they faced and also pulled off two wins to go 2-3 in the tournament.

The two wins came against Northridge and Clay-Chalkville as they pulled off a straight-set victory over Northridge by taking set one 25-13 and set two 25-20. The matchup with the Cougars was a little more tense winning set one 25-21, but falling in set two 25-19. This set up a deciding third set in which Briarwood played from in front for a 15-11 win to take the match.

In two of Briarwood’s three losses, the Lions took set one. They picked up a 25-23 win over Geraldine and a 25-19 win over McAdory before losing the next two consecutive sets in each match.

Geraldine outplayed Briarwood with ease in their matchup winning set two 25-14 and set three 15-7, while the Lions played McAdory much closer falling in set two 25-21 and set three in thrilling 16-14 fashion.

Against Ramsay, the Lions started out a bit slower falling 26-24 in a close first set before rebounding with a 25-20 win in set two. In the deciding set, Ramsay stole the momentum early for a 15-8 win.

Briarwood finished week one of the season with a 2-4 record, but showed some promising things as they began their trek to get back to Birmingham later this fall.