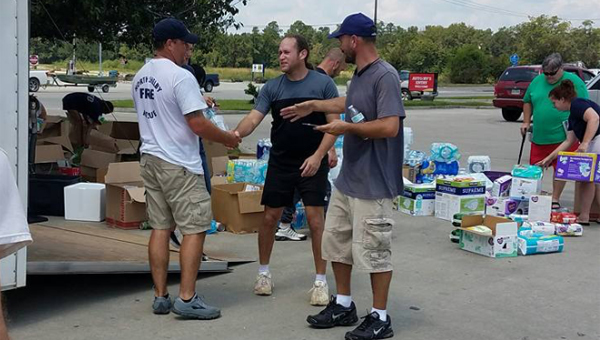 NORTH SHELBY – Firefighter Stephen Leachman helps people every day, but when he saw the devastation Hurricane Harvey has brought to Houston, Texas and surrounding areas, he knew an effort beyond his regular job description was needed.

“As a first responder, I felt the need to reach out and use our resources we have here in the community to help those that have lost a lot through the storm,” said Leachman, who works for both local departments.

Donations are being accepted at CVFD Station 181, located at 5487 U.S. 280 (across the highway from the Lee Branch shopping center); and NSFD Station 2, located at 44996 Caldwell Mill Lane near the intersection of Caldwell Mill Road and Alabama 119.

Leachman and his wife took one load of donations to Texas on Sunday, Sept. 3.

Since there were more donations than he could fit on his trailer, and people were still donating, Leachman decided to take at least one more load in the coming weeks.

“I have the full support of my fire chiefs and the community, and we’re going to keep going,” he said. “As long as people feel the need to give, we’re going to make sure they get it. I want to thank everybody for stepping up. I knew they would, but it’s just good to know you serve a community that’s willing to help when something like this happens.”

During the trip to Texas, Leachman and his wife stayed at a hotel in Lake Charles, Louisiana, where they met an evacuee from Orange, Texas, which is about 100 miles east of Houston near the Louisiana border.

“We got to talking with her and had still been unable to get in touch with anyone in the area we were going to go to at first,” Leachman said. “We actually used her as a coordinator since we had not committed to anyone yet. She coordinated some volunteers and set up a place for us to distribute, and we served almost 1,000 people in about three hours. There was a line waiting on us when we got off the interstate.”

Leachman thanked Rocky Ridge Elementary School, where his wife is a teacher, for donations—and also Pete’s Print and Dawn Thornton of Cahaba Mini Storage off Alabama 119 for their help with the effort.

Oak Mountain hangs on to win thriller, improves to 2-0

BRANDON SUMRALL | Special to the Reporter NORTH SHELBY – Ali versus Frazier, Leonard versus Hearns, Bowe versus Holyfield, all... read more