COLUMBIANA – A 32-year-old Birmingham man is facing a possible lengthy prison sentence after he allegedly stole a work truck belonging to a local heating, ventilation and air conditioning company in mid-August. 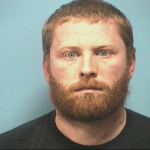 The Alabaster Police Department arrested James Bennett Dellinger, who lists an address on Lakeshore Cove in Birmingham, on Sept. 4 and charged him with one felony count of first-degree theft of property.

First-degree theft of property is a Class B felony, and is punishable by up to 20 years in prison, according to Alabama law.

According to his arrest warrant, Dellinger allegedly stole a 2012 Ford F-150 from a Calera-based HVAC company on Aug. 16, according to Alabaster Police Department Lt. Grant Humphreys.

The Sept. 4 arrest was Dellinger’s third brush with the law over the past several years. According to court documents, Dellinger was charged with public intoxication and third-degree burglary in Alabaster in 2011.

As of Sept. 5, Dellinger was being held in the Shelby County Jail on a $60,000 bond. He did not yet have a preliminary hearing date set in Shelby County Circuit Court.