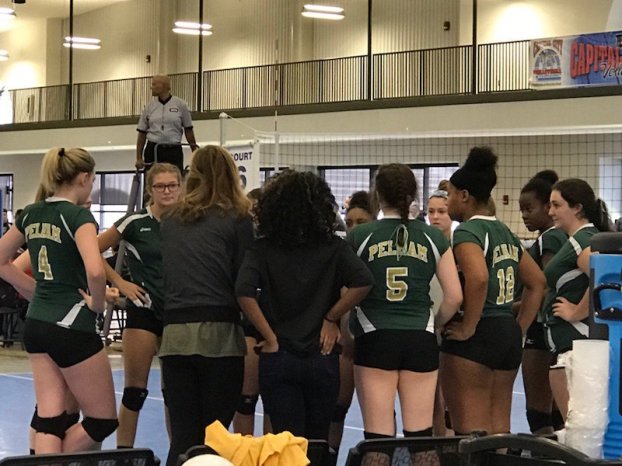 Pelham’s volleyball team got off to a 7-0 start before falling in their most recent game of the season. The hot start has shown they are a strong contender early in the 2017 season. (Contributed)

Pelham returns a strong core to its 2017 volleyball team and they’re off to a flying start to a season that is expected to have a lot of success. Through eight games of the young 2017 season, the Panthers have only fallen once after opening their season on Thursday, Aug. 31, and continuing in a tournament through Saturday, Sept. 2.

The Panthers opened action on Thursday night in a tri-match featuring Vestavia and Hillcrest-Tuscaloosa. After facing off against both teams on its home floor, Pelham walked out of the opening night with a 2-0 record.

Their first matchup was against 7A Vestavia Hills, who the Panthers handled with ease in straight sets. They picked up a 25-17 win in the first set and followed that up with a consistent 25-18 win in the second set to pick up the Panthers’ first win of the new season.

That momentum carried over into match two with the Patriots shortly after in which Pelham picked up another straight-set victory. The Panthers were able to handle Hillcrest in even more dominating fashion with a 25-15 win in the first set and a dominating 25-9 win in the second set to improve to 2-0 after opening night.

Two wins over two quality opponents was something that gave this team a load of confidence moving into its next set of games in Montgomery the following night at the Mayor’s Cup Tournament.

In Pelham’s first matchup of the tournament, they squared off against Sidney Lanier and continued their hot and dominating start. The Panthers picked up their third straight straight-set sweep to start the year with a 25-5 and 25-18 win in two sets against Sidney Lanier.

That streak continued into the Panthers’ fourth match of the season with a win over Indian Springs taking set one 25-17 and set two 25-21 to improve to 4-0.

Those two wins capped off the opening night of the tournament, but the Panthers were right back at it the next morning on Saturday, Sept. 2, at 10 a.m.

It seemed as if the night of rest had killed the Panthers’ momentum early in their first match of the day against Saint James School as they dropped their first set of the year 25-20.

Pelham rebounded, however, with a solid 25-16 win in set two and closed out the match with a tight 16-14 win in set three to pick up its fifth win of the season.

The Panthers got back to their dominating ways in the next match against Wetumpka picking up an easy straight-set victory with a score of 25-10 in the first set and 25-12 in the second set.

Pelham was a team steamrolling through opponents that seemed unbeatable and wasn’t ready to give that perception up as they took down Cottage Hill Christian Academy with sets of 25-11 and 25-8 to give them a seven-game win streak to start the 2017 season.

The unbelievable stretch came to an end, however, in the Panthers’ final match of the tournament against Providence Christian School. After falling in the first set 25-12, Pelham had its back against the wall, but responded solidly with a 25-11 win in the second set.

Their magic ran out in the third and final set as they couldn’t muster up enough points and fell 15-9 to move their record to 7-1 through their first eight games of the season.