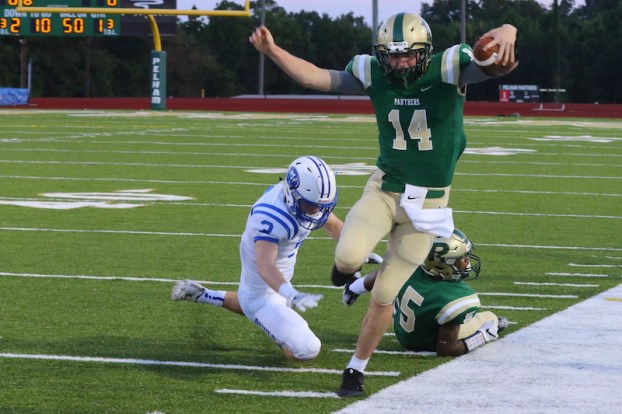 Pelham rebounded from its opening-night loss to Homewood with a 30-15 win over Mortimer Jordan this past Friday night. Now they get Benjamin Russell on the road for their first region game. (For the Reporter/Eric Starling)

It’s going to be a busy week for high school football in Shelby County as all 11 of the county’s AHSAA schools will not only be playing, but competing in the first week of region play.

With every team having played in at least one non-region game during the first two weeks of the regular season, now is the time we find out what these teams are made of and which one will start on the right path to a playoff berth come November.

Calera at Dallas County (Game of the Week)

Calera did exactly what it needed to in week two of the season, rebounding from their opening loss to Mae Jemison with a 25-12 win over Bibb County on the road.

It was due to a much more balanced offensive attack and a defense that outscored Bibb County 25-6 after the Choctaws’ opening drive of the game. This week, Calera gets a Dallas County team they beat on a last-second field goal last year and finished just behind them in the region standings.

I expect Calera to come out on top after Dallas County showed no offensive promise in a 34-0 loos to McAdory in week one and the Eagles showed loads of improvement on both sides of the ball in their second game. Calera 31 Dallas County 17

Spain Park is still in my opinion the hottest team in Shelby County to start the 2017 season. Through two games, the Jags have scored a combined 71 points and given up just 26.

While they came into the season expected to have a strong offense, the defense being so impressive may come as a surprise to at least the coaching staff. While SPHS has gotten used to strong defense under defensive head coach Shawn Raney, he expected a downward trend in 2017, at which I laughed knowing his ability as a defensive coach.

After giving up 19 to Gadsden City, Spain Park responded by giving up just seven in week two to Muscle Shoals in a 40-7 thumping on the road to improve to 2-0.

Vestavia comes into this game off a 6-0 loss to Homewood ending a 10-year winning streak against the Patriots. The offense not clicking isn’t something that will bode well against this Spain Park team that can score and also keep you out of the end zone. Spain Park 24 Vestavia 10

Thompson comes into this game with a 21-20 thriller in week one followed with a bye week to take it all in. Now they’ve had a chance to get better and think about how close they were to falling to 0-1.

This week, the Warriors get a Tuscaloosa County team that finished last in 7A Region 3 a season ago, but that Thompson only beat 10-3. This year, the Wildcats come in with a 1-1 record after a 27-24 win to open the season against Paul Bryant and a 31-14 loss to Northridge this past week.

The way I look at this game is that Thompson is better than a Northridge team that beat Tuscaloosa County 31-14. I fully expect the offense to continue clicking like they did in week one and the defense to be much improved from their opening-night performance as they already showed improvement in throughout that game. Thompson 35 Tuscaloosa County 14

What an unbelievable start to the 2017 season by the Oak Mountain Eagles. They start with a redemption win over Chelsea and followed that up with another redemption win against Hillcrest-Tuscaloosa this past Friday night by denying a two-point conversion attempt at the end to win 28-27.

In week three, the Eagles get another chance at redemption as they host Huffman at Heardmont Park. Huffman comes in 1-0 with a 24-13 win over Parker this past week to start the season.

Last year, Oak Mountain lost to Huffman 21-11 in a game they had no business losing to start the season 0-3. Huffman went on to finish second to last in the region, while the Eagles snuck into the playoffs with just three wins.

Yet again in 2017, Oak Mountain has no business losing this game as the more talented team and I expect another redemption-win by the Eagles to start 3-0. Oak Mountain 24 Huffman 17

Chelsea is off to a slow start, specifically offensively, to the 2017 season and their reward for that will be to take on possibly the best team in its region this Friday night.

Last year, the Hornets put up 92-combined points to start the season, but this year just a mere 17. While this game is important, it’s the two games after against Benjamin Russell and Pelham that are more important must-win games.

This week will most likely result in a loss, but it’s a chance for Chelsea to get a slight bit of confidence offensively moving into an important stretch. The defense, as it has the first two games, will keep them in it before ultimately falling. Chelsea 14 Wetumpka 31

Who saw Pelham rebounding in such a big way this past Friday night against Mortimer Jordan? Not me. I fully expected them to compete thanks to a solid defense, but to pull off a 30-14 win after a heartbreaking start to the season against Homewood was not in my forecast.

The Panthers proved me wrong thanks to four touchdowns from Brandon Sledge and did exactly what they needed to do. Last year’s opening loss sent them spiraling down as they picked up just two wins, but this year, the tables might be turning as they did something they haven’t done in recent years by bouncing back.

These are two of the teams that will be battling for that third and fourth playoff spot come the end of the regular season making it an important early-region game. I expect Pelham’s defense to continue to play at the same level and the offense to improve even more as they start 1-0 in region play. Pelham 24 Benjamin Russell 17

Both of these teams seem to be in a must-win situation if they want any shot at the playoffs. That’s being said in just game one because both haven’t looked their best so far.

Helena comes in off a 41-0 loss to Mountain Brook, while Chilton County has started the season 0-2 with a bad loss to Jemison this past Thursday night.

Whichever team can pick up a win can gain some confidence, while the other could be headed for last in the region. Helena 21 Chilton County 17

Briarwood got off to the exact start that I expected in week one. The defense looked like one of the best in the state, while the offense had a few growing pains in a 19-7 win over Chelsea.

The defense was stout defending short fields on several occasions thanks to offensive turnovers. The offense did however show some promise in running back J.R. Tran-Reno and receiver Carson Eddy. Eddy went over 100 yards receiving with three touchdowns, while Tran-Reno had 96 yards rushing and one touchdown pass.

This is a game the Lions won 42-6 last year and while the offense doesn’t look like it will score that much this early in the season, the defense will give them a chance for a similar blowout in 2017 as they look to repeat as region champions. Briarwood 35 Moody 10

Shelby County opened the season by topping what they did last year against Holt. In 2016, the Wildcats scored 49 in their opener, but decided to one-up themselves in 2017 scoring 51 in a 51-8 win to start the season.

Now, Shelby County goes into a matchup with St. Clair County looking to continue that success like they did a season ago where they won 49-32 in this matchup.

St. Clair County is 1-0, but gave up 49 points in its opener with Lincoln, which doesn’t bode well in this matchup as they’ll face a better defense and offense. Shelby County 49 St. Clair County 31

Montevallo has started the season 1-0 yet again with a 21-14 win over West Blocton to open 2017. While it wasn’t quite the offensive output I expected, the defense lived up to its hype coming into the season locking down a good West Blocton offense.

In week two, the Bulldogs get an American Christian team that is 1-1 and is struggling to score points. Last year, Montevallo won this game 14-7 with a strong defense and I expect them to do the same in 2017 as they get off to a 1-0 start in region play. Montevallo 21 West Blocton 10

Vincent’s reward for starting the season 1-0 for the first time since 2013 is a matchup with the defending region champion LaFayette.

Last year, the Bulldogs beat Vincent by a score of 62-6 on their way to an undefeated region record. That was after scoring 44 and 48 in their first two games, however.

This year, LaFayette only scored 14 and 26 in their first two games and already have a loss on their record as well. While Vincent still has a lot of strides to make and most likely won’t win this game, they have a chance and that’s all this team needs. Vincent 14 LaFayette 31

By ALEC ETHEREDGE | Sports Editor VINCENT – In 2016 the Vincent Yellow Jackets picked up just one win in... read more