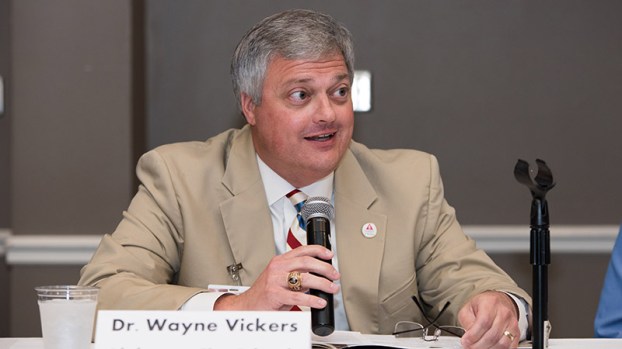 ALABASTER – A statewide music educators organization has recognized the Alabaster City Schools superintendent as the top administrator in Alabama for his contributions to the system’s band programs.

The Alabama Music Educators Association has awarded ACS Superintendent Dr. Wayne Vickers with its 2018 “Outstanding Administrator Award,” and will present the award to him during its conference in Birmingham in January 2018.

Thompson High School Band Director Jon Bubbett nominated Vickers for the award, and praised the superintendent for working to support and expand the program over the past several years.

“The school system doesn’t have all of their eggs in one basket with athletics. (Vickers) truly wants everyone to succeed,” Bubbett said during a Sept. 5 interview. “If he believes in what you’re doing, you’re going to get a lot of support.”

In the nomination form, Bubbett said Vickers has “provided support, encouragement and challenged all teachers and program leaders in the Alabaster City School System to be the very best they can be.”

Bubbett said over the last four years, Vickers has expanded the band staff at THS and Thompson Middle School, has provided for a part-time percussion instructor for THS, TMS and Thompson Sixth Grade Center, has increased supplements and salaries to be competitive with school systems of comparable size, has created an additional elementary music position to support the existing music teachers at the city’s elementary schools and has provided $175,000 in new equipment purchases for the TMS and THS band programs.

Vickers said he was “honored and humbled” by the award, and praised the school system’s music program for being “one of the most premier band programs in the state of Alabama.”

“It’s been very important to me to support all of our programs,” Vickers said. “My mission as a superintendent is to ensure that all of our students are successful with whatever they’re doing, whether it’s academic or extracurricular.”

HOOVER – The 10th Taste of Shelby County event will feature the great food patrons have come to expect plus... read more