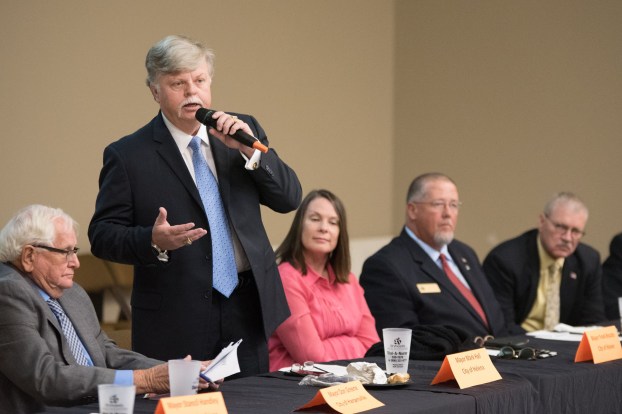 City mayors and representatives look on as Helena Mayor Mark Hall speaks about what has happened in his city. (Reporter photo/Keith McCoy)

Cities give updates at Mayor’s Luncheon

COLUMBIANA – Mayors and representatives of municipalities across Shelby County gathered at Columbiana First Baptist Church on Thursday, Sept, 7, to give updates on their cities during the Shelby County Mayor’s Luncheon. The luncheon was hosted by the South Shelby Chamber of Commerce, and each mayor or representative was given five minutes to address the audience.

“The work that they are doing and the leadership that they are showing is important, and it affects all of Shelby County,” South Shelby Chamber Director April Stone said.

–The city of Alabaster is nearing the end of its fiscal year.

–The city is close to the completion of the extension of Shelby County 26, which will lead out to Old U.S. 31 and improve transportation in the city.

–For the Thompson Road project, the city has opened a bypass road and torn down a bridge.

–Construction on the new high school is progressing, and the school is set to open in December.

–The population in Calera has increased.

–Chick-Fil-A and Dixie RV recently opened in the city.

–The city recently passed its 2018 fiscal budget, and has around $20 million.

–Bids for the city’s bridge project will open soon.

–Chelsea is the second fastest growing city in the state of Alabama.

–Several businesses are breaking ground in the city, which will add jobs.

–Renovations for the new Chelsea Public Library will begin soon.

–Columbiana is currently in the process of refurbishing the main trunk line of its sewer system.

–A new Dollar General recently opened in the city.

–The city is hoping to open a new park and a 10,000-square-foot Shelby County Arts Council building.

–The town recently purchased a building to house a community center, senior center and storm shelter.

–The town recently had its pre-bid conference to pave several streets.

–The Harpersville Drive-In closed this year.

–The town is considering bringing in a new fast food restaurant.

–A Waffle House is opening in Helena, and Beef O’Brady’s opened earlier this year.

–Helena is partnering with Hoover, Pelham and the Alabama Department of Transportation on the four-lane project on Alabama 261.

–The city is improving several intersections, extending a turn lane on Alabama 261 and improve the intersection near Helena Elementary School.

–The city of Hoover recently presented a proposed budget of $111 million in general funds to the city council.

–The city recently made a $5 million contribution to Hoover City Schools.

–The city is doing roadwork near South Shades Crest Road.

–The city is putting in about $1.4 million for IT infrastructure upgrades.

–The city is currently building multiple athletic fields around the Finley Center.

–The city of Montevallo celebrates its bicentennial at Orr Park on Sept. 9.

–A new Taco Bell will be open in the city within a few weeks.

–The city’s renovation of Main Street is halfway complete.

–The city’s new rec city is set to be finished in October, and the new library location is set to be open in the spring.

–The city is currently addressing issues with blight and enforcing city ordinances.

–Building permits in the city have increased substantially.

–Westover is working to improve Internet service for its residents.

–Wilsonville recently approved a $1 million budget for its 2018 fiscal year.

–The city is planning to replace a bridge on Alabama 25 between Columbiana and Wilsonville.

–McCarty plans to oppose Alabama Power’s decision to cap the coal ash pond in the city.

–The city has done extensive renovations and expansions in its public park.

–The Vincent in the Park attracted more people after the city decided to hold it in the afternoon.

By GRAHAM BROOKS / Staff Writer Those planning to travel across the southeast could see an increase in fuel prices... read more