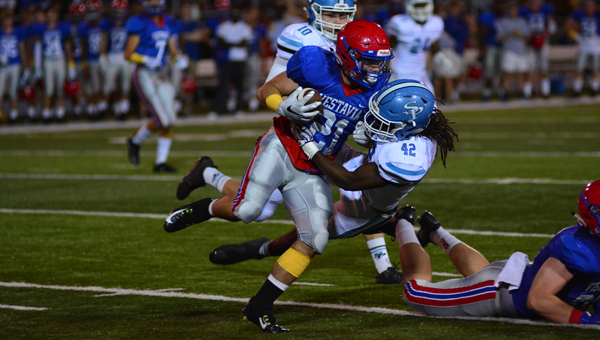 Jaguars cruising into showdown with Hoover

Coach Shawn Raney was pleasantly surprised by the fast start.

“We had two bad days of practice, so I was a little concerned about that,” Raney said. “You start off a game like that, it carried us through the whole first half.”

The Jaguars have outscored their opponents by an average score of 35-13 and now have a showdown with cross-town and region rival Hoover on Friday, Sept. 15, at SPHS.

Spain Park will try to duplicate its fast start against the Rebels.

Johnathan Harland recovered a Vestavia fumble on the opening kickoff and scored moments later on a 1-yard run by D’Arie Johnson.

The touchdown was set up by a strike from quarterback Braxton Barker to JoJo Dennis, who held on to the ball at the 3-yard line despite taking two hard hits as he fell.

Johnson rushed for 42 yards on 12 carries, while Jalen Henderson had 90 yards on 24 carries.

The Jags forced Vestavia into a third down and 13 on the next possession, and the shotgun snap went over the quarterback’s head and into the end zone, where it was recovered by Hayes Cole for a Spain Park touchdown.

Cole Starr was good on the point-after again for a 14-0 lead, and the kicker extended the edge to 17-0 on a 23-yard field goal with 3:21 remaining in the first quarter.

Vestavia Hills then put together its only sustained drive of the game, as the Rebels marched 84 yards in about 3 minutes behind the arm of quarterback Sean Smyth and the legs of William Schaffeld, who scored from two yards out with 44 seconds on the clock in the first quarter.

Caleb Huber made the extra point to cut the deficit to 17-7.

SPHS scored on a field goal by Starr and a 21-yard run by Barker on an option keeper with 5:29 left until halftime.

The Jaguars opened the second half with another touchdown drive, this one kept alive by a fumbled punt that was recovered by Spain Park’s Matthew Moates.

Jalen Henderson leapt over the pile at the goal line for a touchdown with 6:55 on the clock.

The scoring was concluded by Vestavia’s Matthw Paugh sprinted down the right sideline for a 39-yard touchdown with 4:10 remaining in the game.

The win was Spain Park’s fourth consecutive in the series, which has turned after Vestavia won nine of the first 11 meetings.

By NEAL WAGNER / Managing Editor NORTH SHELBY – For only the third time in school history, the Oak... read more