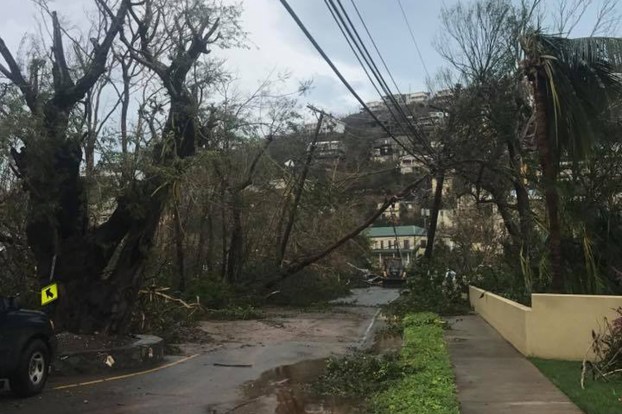 Several Shelby County residents are currently stranded at St. John in the U.S. Virgin Islands after the town was hit by Hurricane Irma. According to Kitty Whitworth and Kallen Morrison of Morrison and Spann, LLC, the island has run out of fresh water. (Contributed)

Representatives from Morrison and Spann, LLC in Columbiana reported that several Shelby County locals are currently stranded at St. John, part of the U.S. Virgin Islands, after Hurricane Irma made landfall on the island.

According to Kitty Whitworth of Morrison and Spann, Ramona Morrison, Sean Stephens, Theresa Terrebonne, David Vickers, Metha Vickers, Jeff Hammock and Vickie Hammock traveled as a group to St. John for a wedding last weekend and are currently trapped there.

Whitworth said she believes the group is safe, but the town has quickly run out of fresh water and other resources.

“The town of St. John is sending out messages that they desperately need help getting out of there,” Whitworth said. “Mrs. Morrison owns this law firm and we’re very concerned about her and the others.”

Kallen Morrison, the daughter of Ramona Morrison, said the group flew to the nearby island of St. Thomas and traveled by boat to St. John. After the hurricane hit, the Cyril E. King Airport in St. Thomas received a significant amount of damage and flights have been cancelled.

Kallen Morrison said she heard from her mother at around noon on Thursday, Sept. 7.

“She said they’re OK, but right now we have no idea how they’re going to get out,” Kallen Morrison said.

According to Kallen Morrison, many people in St. John feel as if they have been forgotten or neglected by the U.S. government and are not receiving the aid they need.

“From what I’ve heard, they’re not receiving a lot of help,” Kallen Morrison said. “It seems like there are a lot of people in St. Thomas and St. John that need a lot of help, and we’re hoping to get the word out.”

FROM STAFF REPORTS ALABASTER – The Lazy Boy BBQ restaurant on Alabama 119 in Alabaster has seen a positive... read more