Rivalry win could be turning point for Jaguars 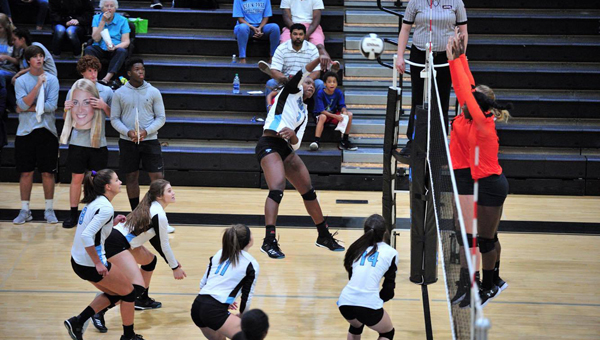 Sha’Kevia Hogan led Spain Park with 19 kills in a 3-1 win over Hoover on Thursday, Sept. 7. (FOR THE REPORTER/LARRY DANCY)

HOOVER – A young Spain Park High School volleyball team took a significant step in its growth with a 3-1 win over crosstown rival Hoover on Thursday, Sept. 7.

“It was big,” Kellye Jordan Bowen said about the Jaguars’ first win over Hoover in her four seasons as coach. “We’ve had a slow start with only two returners, trying to find a rhythm. It was good for them to get that win.”

SPHS found itself down, 18-12, in the first set, and Bowen said she called a timeout to try to settle a team overwhelmed by the situation—facing a talented, experienced team in a tense, raucous home setting.

“It was nerve-wracking for the young ones,” Bowen said. “They just had to settle in and get used to playing at home and in front of a crowd.”

“They were down and they came back,” Bowen said. “I’m very proud of them for that.”

Bowen hopes the win will prove to be a turning point, as Spain Park is off to a 3-6 start after uneven performances in the Juanita Boddie Tournament and in a tri-match against Bob Jones and James Clemens on Tuesday, Sept. 5.

“On Wednesday, we worked hard on competing mentally, physically and emotionally,” Bowen said. “Everybody did their part last night. That was the first time this year we’ve done that.

“That has to be the standard, and they have to progress from that. It can’t be the highlight of their season.”