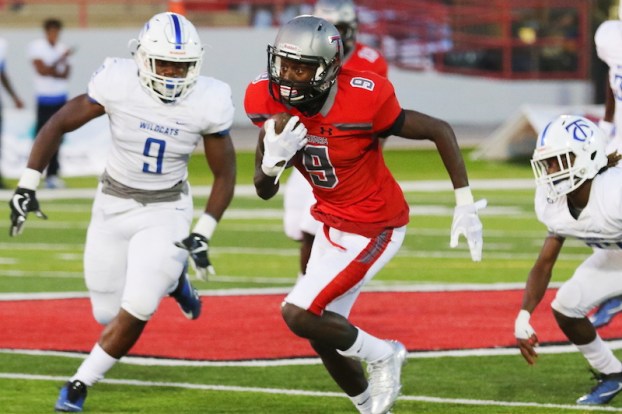 Thompson was able to run all over Tuscaloosa County putting more than 500 yards of total offense in a 63-22 win to move to 2-0 (1-0) on the season. (For the Reporter/Eric Starling)

Coming into the season, the talk around Alabaster was how well the Warriors had done in the 7 on 7 contests during the lead up to this year’s campaign.  Hosting Tuscaloosa County in their first Region game of the season, the fans are now talking about 7 “for” 7.  The Warriors possessed the ball seven times in the first half with each possession resulting in a touchdown.  Thompson would coast to a 63-22 victory.

Tuscaloosa County would receive the kick-off to start the contest, and fifty-five seconds into the game, fans had witnessed 21 total points.  The Wildcats would score on a 76-yard run from scrimmage on the second play of the game and a 92-yard kick-off return after the Thompson score.

The Warriors found themselves down 7-0 as they started at their own 36-yard line on their first possession.  Senior running back Joseph Ford took the handoff from Taulia Tagovailoa and busted through the line for a 64-yard touchdown run.

“A lot of these guys have been here for three years and really know our system, and Taulia has come in and worked very hard to learn it,” stated Coach Mark Freeman.  “His job is to get us to the run when the play dictates run, and tonight he did that quite well.  Making the reads and mixing the run and pass successfully.”

Thompson’s second drive was a seven play, 61-yard drive that culminated with Shadrick Byrd punching it in from three yards out.  Samuel Serrato’s second extra point attempt of the night tied the score up 14-14.

The Wildcats watched as Tagovailoa put on an aerial display over the next five drives for the Warriors.  The Junior quarterback would connect with Morris Edwards for touchdowns of 41, 42 and 5 yards.  He would also pair up with Ahmad Edwards for a 34-yard score.  Tagovailoa finished the night with an impressive 19-25 completions for 329 yards and four touchdowns.

The running game added an additional 216 yards of offense for the Warriors.  Byrd would run for another 12-yard score in the first half, and Joshua Clinkscale would add a 2-yard score in the fourth quarter.  Ford would lead all Warrior rushers with 96 yards.

Special teams also came up big on the evening when they successfully executed a reverse on the second half kick-off for a 75-yard score.  Kyle Smoak would receive the kick for Thompson, and hand the ball off to Michael Pettway who would dash down the sideline for the touchdown.

The Warriors (2-0, 1-0) will host Mountain Brook next Friday at Larry Simmons Field.