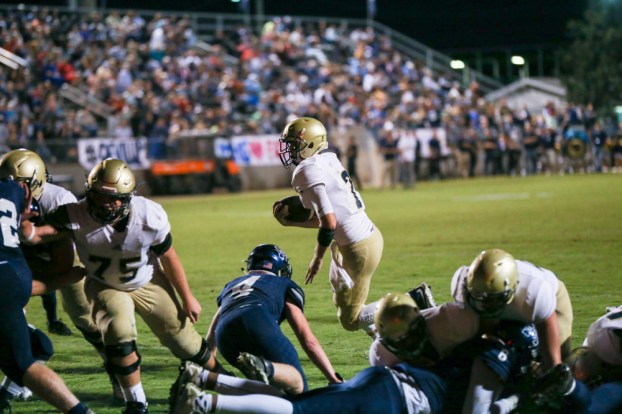 Briarwood quarterback Michael Hiers had an impressive showing in his second start punching in three TDs on the night. (For the Reporter/Todd Kwarcinski)

MOODY – Briarwood went into its matchup with the Moody Blue Devils on Friday, Sept. 8, having won its last eight regular-season games and that streak was never in danger as they came out their road trip with a ninth consecutive region win 35-14.

“It was a nice start to region play for the boys tonight,” head coach Fred Yancey said of the 1-0 region start to 2017. “We still made quite a few mistakes and have to keep working to improve, but all-in-all it was a good night for us.”

The win was in large part due to a defense that continued to look like the best 5A defense in the state.

“The defense just did a great job,” Yancey said. “I think when the number one defense was in, they gave up less than 20 yards for about two-and-a-half quarters. That was probably the most important factor in winning this game because it helped our offense relax.”

The offense did take advantage, and it started with J.R. Tran-Reno, who picked up right where he did a week ago. Tran-Reno took in the first score of the game from 9 yards out with 6:04 remaining in the first quarter. A two-point conversion gave the Lions an early 8-0 lead.

With the defense forcing three-and-outs left and right, the offense was able to settle in and wear down Moody’s defense with long drives. Quarterback Michael Hiers was able to lead two drives in particular that ended with him punching in a 2-yard touchdown to start the second quarter and another from 4 yards out at the end of the quarter.

His two TDs gave the Lions a 22-0 lead, but that wasn’t enough as they were able to get the ball back quickly and Hiers ran in his third touchdown of the quarter with 59 seconds until the break to put his team up 29-0

“Hiers did a good job last week and had another good game tonight,” Yancey said. “Overall we just ran the ball better tonight, with him included, and that’s all due to the offensive line helping us be more effective in that aspect, which led to some nice drives.”

While the offense slacked off, Briarwood’s defense continued to impress in the second half. The offense failed to score in the third quarter, but the defense held steady with the shutout heading to the fourth.

With the backups in, Moody was able to put up two late touchdowns, while Briarwood scored one additional touchdown for the final score of 35-14.

Overall, it was a strong performance on both sides of the ball and exactly the improvement they needed to see with two weeks of play now in the books.

“I think these boys are confident that we are going to have a strong team so I’m not sure this made us more confident, but it would have been a bad deal not to show improvement tonight so we were pleased we at least showed some improvement,” Yancey said.

Now the 2-0 (1-0) Lions will prepare for what is arguably their biggest game of the year when Wenonah comes to Lion Pride Stadium this Friday night for what should be a top 5 matchup and a rematch of last year’s 5A semifinal game that Wenonah won 14-8.

“That’s going to be a huge game because Wenonah has won 10 games a season for a long time,” Yancey said. “We know they’re going to have an exceptional team. If we match them then we’re in the right where we want to be, but if they beat us bad then we know we have a lot of work to do.”

Last year, the Lions matched up to them in the regular season winning 15-14 on the road and also matched up with them in that tough 14-8 loss in the playoffs. With Briarwood’s defense playing lights out again, it should be hard-fought battle between the two.

Montevallo’s offense shut out at ACA

By Chris Megginson | For the Reporter TUSCALOOSA – A late fumble return for a touchdown was the only points... read more