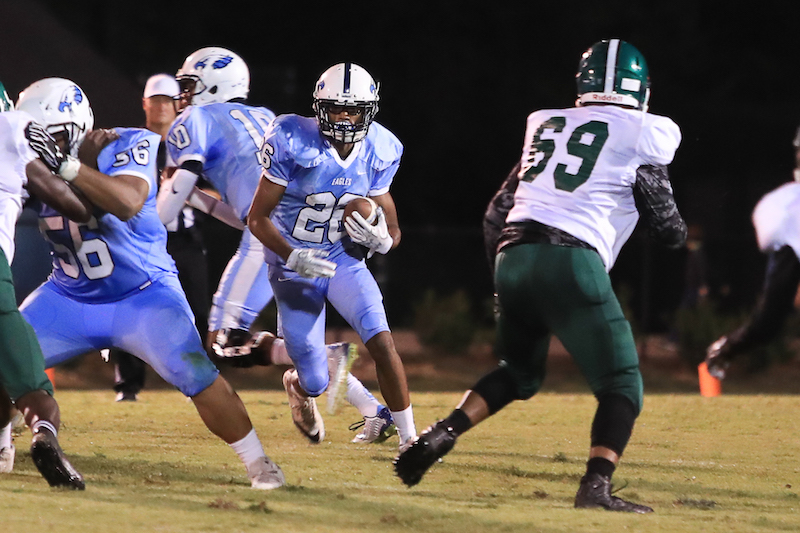 Tyler Agnew ran for 141 yards and one touchdown in Calera’s 53-7 route of Dallas County on Friday, Sept. 1. It’s a game the Eagles won 25-22 on a last-second field goal a season ago. (For the Reporter/Dawn Harrison)

CALERA – Through the first two weeks of the 2017 football season, the Calera Eagles had their share of ups and downs, but during the second half of their game with Bibb County on Sept. 1, it seemed as if they had turned a new page.

After falling behind 6-0 in that game, the Eagles went on to outscore the Choctaws 25-6 the remainder of the game, shutting them out in the second half. That complete domination transferred over into game three of the season against Dallas County as Calera didn’t give up a single defensive touchdown on its way to a 53-7 route of the Hornets on Friday, Sep. 8.

“It was a great job by the defense tonight,” Calera head coach Andrew Zow said after the region opener. “They run a lot of similar stuff that we do, so we really practiced against ourselves this week and got a good feel for what would happen.”

It’s a defense that has now gone six consecutive quarters without allowing a score only giving up a kick return for a touchdown to Dallas County.

It wasn’t just the defense, however, that made this such a breakthrough game for the Eagles, but the fact their offense showed up and looked better than it has in a while putting up its most points since 60 in 2014.

The biggest reason for that success was the balance that evaded Calera in the first week of the season only rushing for 50 yards. In last week’s game they found that balanced attack throwing for 180 yards and adding another 126 on the ground.

Against the Hornets, Calera continued that balanced attack running for 254 yards and throwing for an additional 173 for a combined total of 427 yards on the night.

“We were very sound tonight offensively,” Zow said. “The run game was very impressive even though we were down a back in Dee Mickens, who we really wanted to go tonight. Being able to run the ball and be balanced is what I look for the most and we were able to do that tonight.”

That rushing attack was led by Tyler Agnew, who had 141 yards and one touchdown on the ground making several shifty moves on the night. Jermaine Ross wasn’t too far behind Agnew adding two more touchdowns and 83 yards.

Calera started the game fast and played that way all night scoring on ever drive in six plays or less. After a field goal on the first drive of the game, the Eagles made the most their second drive, which began at the Dallas County 36-yard line.

After a 21-yard pass from Quad Brown to Chandler Smith set them up inside the 20 and a personal foul moved it to the 9-yard line, Ross punched in his first touchdown of the night to put the Eagles up 10-0.

With the defense forcing three-and-outs every possession the offense was freed up. While the rushing attack had its best game of the season, the play of Brown at quarterback can’t be overshadowed.

On Calera’s fourth drive of the game, Brown found Dee Woodson for a 39-yard touchdown pass to put the Eagles up 17-0. Zach Ford added his second field goal on their next possession to extend the lead to 20-0 before Brown made another big play happen.

This time he found Chandler Smith for another 39-yard touchdown pass that featured a strong move by smith to get open on a comeback route and then a broken tackle before taking it to the house to put Calera up 26-7.

It was all Calera the rest of the way as Brown picked up his third passing touchdown early in the third on an 11-yard pass to Dylan Killingsworth.

Calera continued to lay the hammer down defensively forcing four consecutive turnovers by Dallas County late in the game leading to a lopsided 53-7 win.

“A win like this does give you some confidence,” Zow said. “The play is what I’m concerned with. You always have to play at a certain level regardless of who you are playing and if we do that we’re going to be okay. We’re still growing, but we can’t have up and down moments like we did in that first game. I think we showed a lot of growth tonight.”

Calera is now 2-1 overall this season and 1-0 region play as they travel to Central Tuscaloosa next week before facing Demopolis on Sept. 22. Calera will be on the road until an Oct. 13 matchup with Sumter Central.