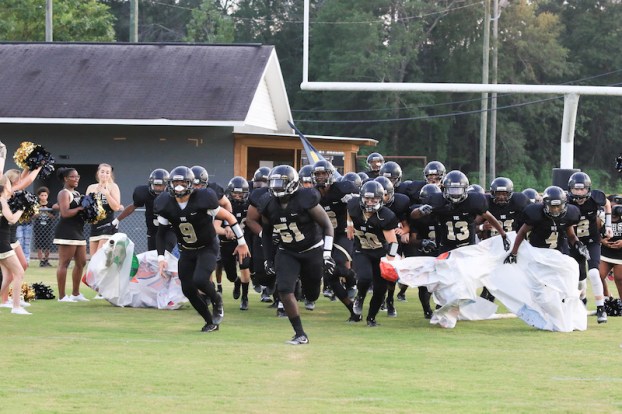 Vincent fell to LaFayette to open region play on Friday, Sept. 8, but showed drastic improvement falling 24-8 in a game they lost 62-6 a season ago. (File)

LAFAYETTE – What is starting to look like a completely different and improved team at Vincent continued to make strides on Friday, Sept. 8, as they traveled to LaFayette High School for an important region matchup early in the season.

Vincent came into the game with a load of confidence after starting the season 1-0 for the first time since 2013 in a 14-13 win over Pleasant Valley. That win also matched their win total for the past two years combined through just one game of the season.

The Yellow Jackets’ reward for the big moment was a matchup with defending region champion LaFayette, who finished last year undefeated in region play.

While Vincent was coming in with a 1-0 record and a bye week and LaFayette was 1-1, it marked a rematch of a game that Vincent lost 62-6 last year showing that they had a lot of ground to make up if they even wanted a thought of winning.

The guys battled hard and fully believed they could win, which they should’ve believed and had a strong chance to do for much of the game. Unfortunately for the Yellow Jackets they fell 24-8, but to make that kind of improvement against this caliber of team is still unbelievable.

“The kids played really hard tonight against one of the better teams in 2A,” head coach Wiley McKeller said after the hard-fought battle. “I couldn’t be more proud of them right now.”

While the final score didn’t seem too close, LaFayete held a slim 12-8 lead at the half giving Vincent a shot in the second half, which was repeatedly said could happen throughout this past week.

Whether it be the pressure or inexperience of young guys, the Yellow Jackets couldn’t find that same magic in the second half. A big reason for that was turnovers very early on in the third quarter as they fumbled the ball on three straight drives to start the second half.

Vincent was never out of the game despite that, but just couldn’t find any confidence offensively against a very good LaFayette defense the remainder of the way.

Zavien Kelley led the Yellow Jackets as the top producer with 100 yards receiving and a two-point conversion.

In most cases a loss is a loss, but in this case the loss may have very well been a win for Vincent showing their improvement on the defensive side of the ball this year and establishing them as a legitimate playoff contender and challenger for one of the top four spots in their region.

“If we stay healthy, I really feel like we can reel off some region games after these first two region matchups,” McKeller said. “Our kids are feeding off of the positive attention they’ve been receiving and are really starting to believe they can compete against anybody.”

Vincent will continue its tough two-game road trip on Sept. 9 as they travel to take on last year’s second place team from the region in the Lanett Panthers, who beat them 58-13 last year. After that, the Yellow Jackets will have some very winnable games the rest of the way, especially in region play.

Cities give updates at Mayor’s Luncheon