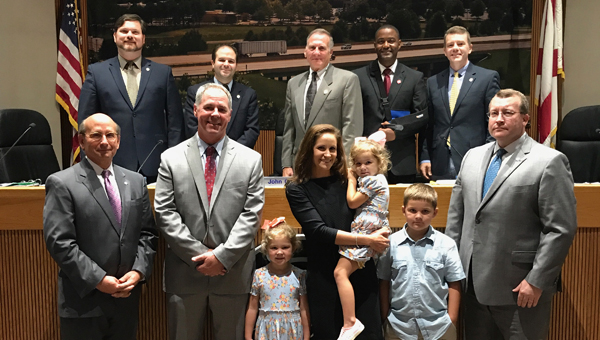 Clay Bentley, front row second from left, was announced as the new chief of the Hoover Fire Department at a City Council meeting on Tuesday, Sept. 5. Bentley is pictured with his family and Hoover officials. (CONTRIBUTED)

HOOVER – Clay Bentley plans to bring the values learned through his faith and as a fourth-generation farmer to his new position as the Hoover Fire Department’s top official.

Bentley was announced by Mayor Frank Brocato as HFD’s fourth chief, replacing the retired Chuck Wingate, at a meeting of the Hoover City Council on Tuesday, Sept. 5.

“The chiefs before you have laid an incredible foundation starting out with the volunteer fire chief in 1962,” said Brocato, whose background is with the department and said he has known Bentley for more than 25 years. “You have quite a legacy to stand up to, and we’re confident you can do that. This is a great occasion for our city.”

Bentley’s time with HFD started in January 1997 as a firefighter.

A native of Thorsby, Bentley attended the University of Montevallo and volunteered with the local fire department while earning a degree in management.

“I always wanted to work for Hoover, even in high school,” he said. “I feel this city is the best city to work for anywhere. They take care of their people. And I think our department is in fantastic shape. We have wonderful people, facilities and equipment, and the funding is always there.”

In his time with HFD, Bentley worked at Stations 4, 5 and 1 as a firefighter lieutenant, captain, battalion chief and most recently head of the Health, Safety and Training Division.

Hoover Fire Department has grown, responding to about 12,000 calls a year compared to about 3,000 calls in 1990. The department includes 178 employees and 10 stations.

Bentley said his goals for the department include maintaining the recently accomplished Class 1 ISO rating, undergoing an extensive accreditation process, partnering with Hoover City Schools for a firefighter vocational training program and developing personnel, which he calls his top priority.

“We can buy fire trucks, but I want us to focus on our people,” Bentley said. “I want our people to be prepared for anything.”

The new chief will also need to fill the vacant assistant chief and training chief positions.

Though the family will move to Hoover, Bentley said they plan to remain involved with their long-time church, Thorsby First Baptist.

Bentley also plans to keep his Thorsby farm, where a couple of hundred acres produces soybeans and corn.

“I hope to keep that going because it’s an important part of my life,” Bentley said. “I want my kids to experience some of the things I experienced.”