“The most fascinating thing about being a beekeeper is learning about these incredible creatures God has made,” said Harris Cannon, a Chelsea resident who farms and sells local honey. “A worker bee will cover about a two-mile area to gather nectar for honey. But, over her lifespan she will only gather enough nectar to make 1/12th of a teaspoon of honey, just 1/12th.”

Apex Bee Company online website says on each collection trip a bee may visit from 50 to 100 flowers, and it may make over 12 trips a day in its lifetime of only 42 days in the active summer months. It takes about 556 worker bees covering about 2 million flowers to collect enough nectar for one pound of honey. And, one gallon of honey takes about 55,000 flight miles. 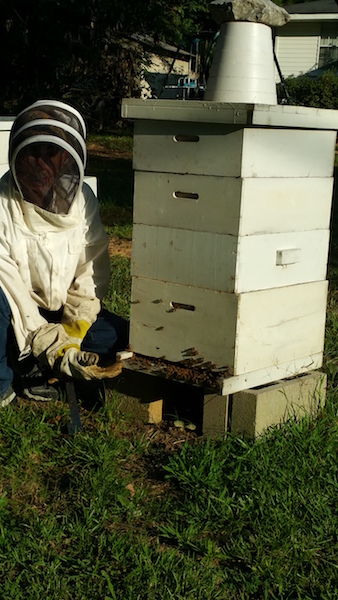 No wonder Cannon finds them fascinating.

“A friend of mine suggested we start together. We became members of the Shelby County Beekeepers Association, took a two-month course, and ordered our first bees.”

Cannon picked up his bees “from a place down below Sylacauga” and they came in a 3-pound box with the bees, including a queen, locked in a small cage inside.

The website for the Shelby County Beekeepers Association (SCBA), ShelbyBees.org, says the “SCBA was formed exclusively for non-partisan charitable educational and scientific purposes” and their membership is only $10 a year.

Cooper started about four years ago and has had a good honey harvest this year.

“The last couple of years we had a dry spring and I only had about 30 pounds of honey. This year has been better. I had about 100 pounds but it is almost all gone now.”

“I used to try to go to the markets around,” said Cannon, “But they charge about $20 for a booth. It can be expensive to keep bees. You have to buy a lot of equipment, and I only charge $8 a pound. So, I just put up some signs and folks have stopped. They like the idea of local honey. There is a mindset that it helps with allergies to local pollen, but I don’t have allergies so I can’t testify to it.”

“I sell a little along, a jar or two a day sometimes, then other days none. The most I’ve sold was four, the day you got yours. People may think we make a lot of money on it, but everything I make I put back into taking care of my bees. It’s a great hobby, though, and if it helps out some people I am happy to do it for them.”

Cannon said that if anyone is interested in learning about beekeeping they should contact the SCBA. Their Email is shelbycobeekeepers@gmail.com and they meet at 6:30 to 8:30 p.m. second Thursday of each month at Hope Christian School, 419 Philippians Boulevard in Pelham.