While the opening of a new school year is often routine, the 17-18 PCS school opening has proven unique. In addition to significant personnel changes and a new middle school, the eclipse experience of Aug. 21, 2017 certainly set the year apart. At Pelham High School, science teachers and English teacher Ryan Dye assisted Principal Amanda Wilbanks with student information distribution and preparation for viewing the eclipse at school.

Students were required to provide their own protective eyewear and bring a parent-signed permission slip to go outside and experience the eclipse with select teachers. Glasses were inspected by appointed experts before students were allowed outside in order to protect their eye safety. All students remaining in the building congregated in the auditorium where NASA TV revealed the eclipse on a large screen as it appeared in its more complete form in Nashville. 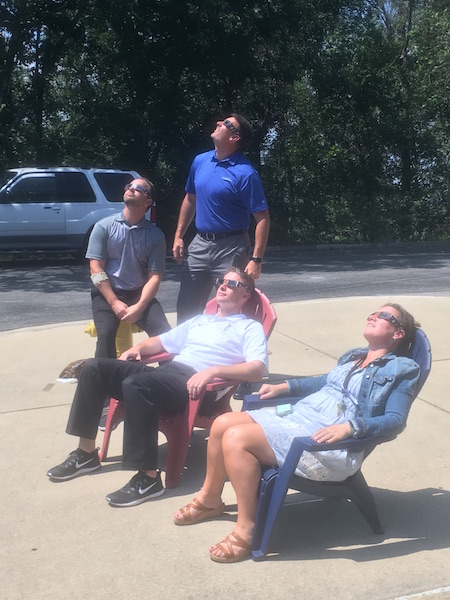 PHS teachers reveal immense and intense preparation by their ability to relax during the eclipse. (Contributed)

What seemed to differentiate the PHS students’ eclipse experience was perspective. “The most interesting part to me was how much the temperature dropped even though the sun was not completely covered up,” PHS Junior Karleanna Abshire said.

Perspective in writing is a concept that I explain to students by comparing football stadium seating. While a fan on the 50-yard line has preferred seating, the fan in the end zone has the best perspective to determine whether or not a field goal successfully flies through the uprights. Of course, most of us would prefer the best seat in the stadium; however, the best perspective on the success of the kicker is revealed by the one in the direct path of the ball—and certainly by those attendees who are paying attention to the action around them—and perhaps by those who are charged with caring for those most in need of assistance.

“The eclipse was awesome. I was at PPMS helping the special needs kids keep their glasses on so they could experience the moon almost completely covering the sun,” PHS Senior Samantha Winn said.

Perhaps Winn’s perspective was colored by the reaction of those she assisted.

As this new year begins, focusing on students is key.