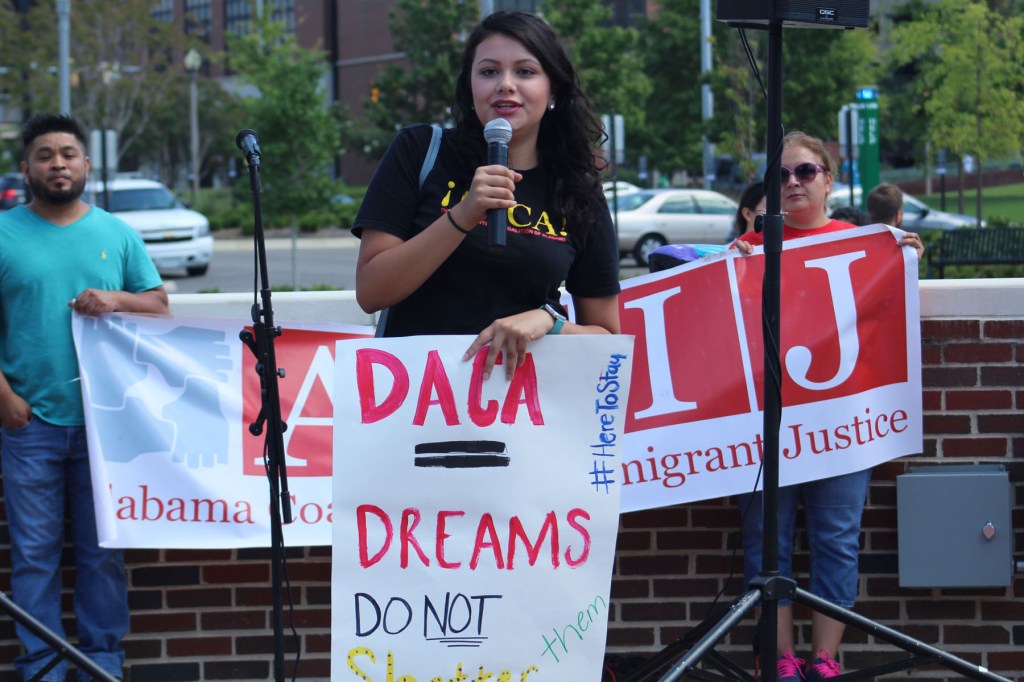 Many Shelby County DACA recipients and supporters spoke out against the recent decision to revoke DACA at a rally at UAB on Wednesday, Sept. 6. (Contributed)

Along with citizens and immigrants across the nation, Shelby County residents reacted in different ways after U.S. Attorney General Jeff Sessions announced the rescission of Deferred Action for Childhood Arrivals on Tuesday, Sept. 5.

DACA was established in 2012 under the Barack Obama administration, and allowed about 800,000 undocumented immigrants who arrived in the country as minors a two-year period of protection from deportation and eligibility to receive a work permit.

According to a release issued by the White House, Sessions said DACA recipients, also known as Dreamers, will not be impacted until March 5, 2018, which will give Congress time to “consider appropriate legislative actions.”

Dawn Ray, with the Republican Women of Shelby County, said she agrees with the decision and referred to DACA as unconstitutional.

“We support the rule of law. Immigration is under purview of the U.S. Congress, who pass laws regarding,” Ray said in a statement. “The DACA program was created by executive order and is therefore unconstitutional. We support the Trump administration in calling on Congress to deal with this issue.”

Alabama State Sen. Cam Ward, R-Alabaster, and Alabama State Rep. Matt Fridy, R-Montevallo, said they believe that the legislative branch, and not the president, should take the lead on immigration policies.

“A lot of these executive orders, while they may feel good, are a violation of separation of powers,” Ward said.

“I agree with President Trump. I think its Congress’s job to set immigration policy by enacting law,” Fridy said. “The president can not just pick and choose what laws they are and are not going to enforce.”

Both Ward and Fridy said they agree with the six-month period that will allow Congress to act.

“I think President Trump is doing the right thing,” Fridy said. “He’s given Congress plenty of time to act and do their jobs.”

As of Sept. 11, a message left with the Shelby County Republican Party has not been returned.

Rubio said the rescission will leave many Shelby County residents who benefit from DACA “without the immediate ability to improve their lives through education and employment.”

“It basically protects young children whose parents emigrated here. It gives them protection from deportation, and it allows these kids to go to school, drive, have jobs and contribute to society,” Rubio said.

According to Rubio, the rescission of DACA could have negative economic impacts on Shelby County, as well as the rest of Alabama.

“Right now, DACA-eligible students contribute about $800 million to our state and over $1billion over a 10-year period,” Rubio said. “Everyone in the state of Alabama who buys anything, regardless of their immigration status, pays taxes. The whole immigrant community is contributing to our tax base. As one of the poorest states in the U.S., can we afford to lose any more money?”

Pelham High School graduate and immigrant rights activist Victor Cuicahua said life was hard for many young immigrants in Shelby County before DACA was established, especially after Alabama House Bill 56 was signed into law in 2011.

“Life in Shelby County was difficult for a lot of reasons. You could not get a job legally. A lot of undocumented students who wanted to go to college could not do so. Shelby County residents understood that their options were limited,” Cuicahua said.

Before he moved out of Shelby County in 2013, Cuicahua said he helped organize community groups for immigrants around the state.

“One of the main things I did was help organize efforts in response to HB56. The majority of my work involved engaging immigrant youth, so-called Dreamers,” Cuicahua said.

Through the rescission of DACA, Cuicahua said Shelby County would lose many bright students and talented workers.

“The rescinding of DACA hurts us all. We’re getting rid of our most promising prospects from Alabama and Shelby County,” Cuicahua said. “We’re basically shutting the door for future teachers, future doctors, future lawyers.”

Cuicahua said undocumented immigrants, regardless of whether they are DACA recipients or not, are important members of society.

“Whether people like it or not, undocumented immigrants are interwoven with the state and with the nation,” Cuicahua said.

Pelham resident Brenda Galvan said the rescission of DACA will reduce options for herself and many of her friends and family members in Shelby County.

“Since I started DACA, I’m able to get a job that isn’t under the table. I’ve been able to get a drivers’ license,” Galvan said. “It’s given me stability. It’s keeping me safe and secure.”

Galvan said the DACA decision would nullify the efforts of many Dreamers who are currently students or in the workforce.

“Once their DACA expires, all of the college credit they’ve earned is no longer valid. Even if they have a degree, they won’t be able to work,” Galvan said. “They won’t have any way to work in the U.S. legally. All the work that they’ve put in while on DACA will be taken away.”

Rubio and Galvan said that they, along with many others, are pushing for the U.S. Congress to pass the Dream Act of 2017, which would give Dreamers a path to residency or citizenship.

“We know that comprehensive immigration reform is needed. We have to address this issue or we’ll lose some of our brightest stars of the future,” Rubio said.

“DACA was just permission, while the Dream Act will reassure that it won’t be taken away from us,” Galvan said.

Galvan also encouraged Shelby County residents to educate themselves on what DACA is and listen to those who will be affected by the changes.

“I’m not asking for people to change their whole perspective. I’m asking them to open their minds and think about that the Dreamers are going through. It’s not about immigration. It’s about the students who are already here. They’ve made the U.S. their home.” Galvan said. “If you don’t understand what DACA is, look it up. Learn about it. Don’t just listen to the news. There is wrong on both sides. Listen to someone who is a DACA recipient and learn from their stories.”