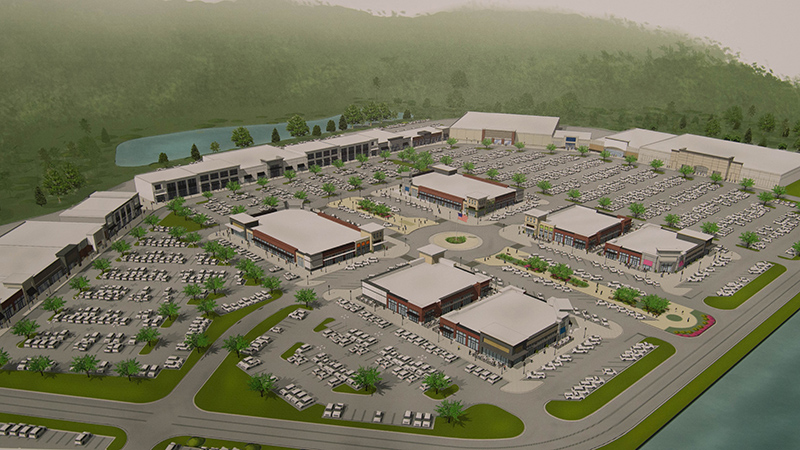 ALABASTER – A more-than-350,000-square-foot shopping center fronting Interstate 65 is shooting to open in Alabaster in 2019, the developers announced after the Alabaster City Council approved an incentives package for the development during a Sept. 11 meeting.

The new “District 31” shopping center will be on 75 acres across I-65 from the Propst Promenade shopping center, and will be near the intersection of I-65 and U.S. 31.

“I live in Alabaster, and the Alabaster market is definitely where retailers want to be right now,” said developer Keith Owens, the President and CEO of Alumni Properties Inc. “This shopping center will be a totally different feel from what you see in the market today.”

Owens, who attended the Sept. 11 meeting with Alumni Properties managing partner Roy Price, said the center will feature regional and national retailers and restaurants new to the Alabaster market, and will also include office space. He said Alumni Properties has been working with possible tenants for the development, but is not yet announcing which tenants will be coming to the new shopping center.

“It will be very classy and well-done,” Owens said, noting construction crews likely will begin moving dirt on the development within six months. “We wanted to create something where you don’t have to just shop, but hang out.”

During the Sept. 11 meeting, the City Council voted unanimously to approve an incentives package with Alumni Properties, through which the city will refund to the developer 1 percent of the city’s sales tax for either 30 years or up to $25 million, whichever comes first. The penny sales tax tied to the city’s education fund will not be included in the incentives package.

Once I-65 is widened between exit 242 in Pelham and 238 in Alabaster, upgrades will be made at exit 238 to allow traffic to travel directly from the interstate into the shopping center, according to Alabaster Mayor Marty Handlon.

Handlon said the city has been working with the developer to finalize an agreement since November 2016.

“This has been a long time coming,” said Ward 1 Councilwoman Sophie Martin, whose ward will contain the new shopping center. “This is really a monumental benchmark that will change the face of our city.”