COLUMBIANA – A Bessemer man was recently arrested and charged with two counts of attempted murder of a police officer, one count of obstruction of justice, one count of possession of marijuana in the second degree, one count of attempting to elude law enforcement and one count of carrying a pistol without a license.

According to a release from the Pelham Police Department, John Arden Mason IV, 38, was arrested after he allegedly fired several rounds at officers while attempting to flee after he was discovered with an outstanding warrant. 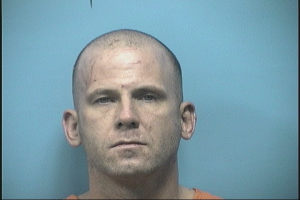 Officers stopped Mason’s vehicle on Valleydale Road near Interstate-65 at around 11:45 p.m. on Monday, Sept. 11 for inoperable taillights. During the stop, officers learned that Mason was wanted in Bessemer on domestic violence charges.

According to the release, Mason originally presented officers with another person’s ID.

“That could be an additional charge at a later date,” Palmer said.

According to PPD Chief Larry Palmer, officers had initially begun taking Mason into custody when he requested to return to his vehicle, citing that the vehicle was having problems. Once they approached the vehicle, Mason drove away “at a high rate of speed.”

Officers pursued Mason on Valleydale Road to the parking lot of Lowe’s Home Improvement in Hoover. As he was fleeing from the parking lot, Mason began firing at officers before running into a nearby wooded area. Palmer said officers did not fire back.

The release stated that the Hoover Police Department and one of their K-9 officers assisted the PPD with apprehending Mason. Several shell casings and a handgun were found at the scene.

“We were able to form a parameter once he was on foot and get a grid search of that area,” Palmer said.

Palmer said he was relieved to report that no officers or citizens were killed during the incident.

“This is a true example of why no traffic stop should be called ‘routine,’” Palmer said. “Our officers put their lives on the line every time they report to work.”

Palmer said the incident is part of an ongoing, nationwide problem that police officers face.

“It’s across the country where police officers are being attacked for doing their job and being attacked for just wearing the uniform. To me, that’s no acceptable,” Palmer said. “If an officer approaches you, please do what the officer says and we can determine a very positive outcome.”

Palmer commended multiple agencies and the officers involved for their contributions to the case.

Mason is currently being held at the Shelby County Jail on bonds totaling $137,000. Palmer said the case is currently being investigated. According to Palmer, Mason had previously been released on bond for a charge with another agency at the time of his Sept. 11 arrest.

“This young man has a history, and is well known by law enforcement,” Palmer said.