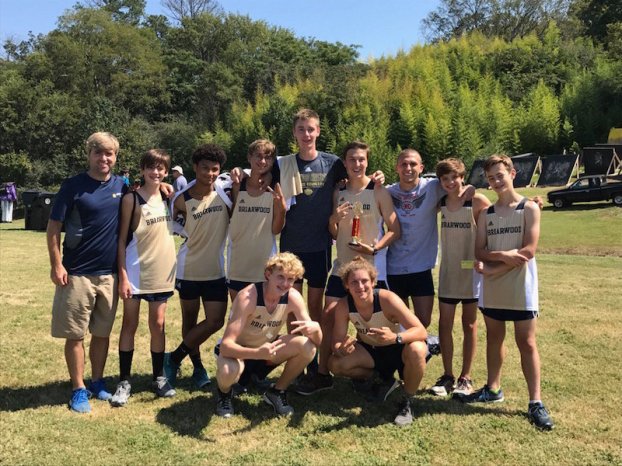 Briarwood’s boys cross country team finished in second during its opening event of the 2017 season led by Zach Howard, who finished in first. The girls also had a strong showing, finishing in third. (Contributed)

GADSDEN – Hype surrounded the Briarwood boys’ and girls’ cross country teams coming into the 2017 season, and they proved it was worthy in their first event of the season finishing second and third, respectively, at the Etowah County Trail Invitational on Saturday, Sept. 9.

Both teams were led by two top 10 finishers and one top 3 finisher during the event.

Zach Howard of the boys team didn’t just start the season strong, but picked up a championship in his first event of the year. Howard, a senior, finished in first with a time of 17:37.98, almost 30 seconds faster than the second-place time of 18:02.87.

With three races finished in less than 17:00 last year, it wasn’t Howard’s best 5K time by any means, but still dominated the rest of the field to give him his second championship since last season started and sixth top 5 finish.

Freshman Trent Malloy also had a strong showing finishing 10th to give the Lions’ boys team two top 10 finishers in the race. Malloy ran the race in 19:05.39 finishing a little under two minutes behind his teammate in his first event with the varsity squad.

The girls were also led by a freshman in Adrienne Goolsby, who had her highest finish in four XC events with the Lions by taking home third. She finished the race with a time of 22:32.52, which was just less than a minute behind the winning time of 21:34.63 set by Trinity Roberts of Pleasant Valley High School.

Last season, Goolsby had a fifth-place finish in the Class 5A, Section 2 race, despite her fastest time of 21:55.09 still being in the state championship where she finished in 45th.

After Howard and Malloy, Briarwood’s boys also had other strong performances starting with senior leaders Wade Herren and Bryant Wood.

Briarwood finished second in the overall team standings of the boys’ race with a total of 112 points, which was 55 points behind Pleasant Valley’s 57 as they swept both divisions.

By ALEC ETHEREDGE | Sports Editor  OAKVILLE – The first major cross country event of the 2017 season is in the... read more