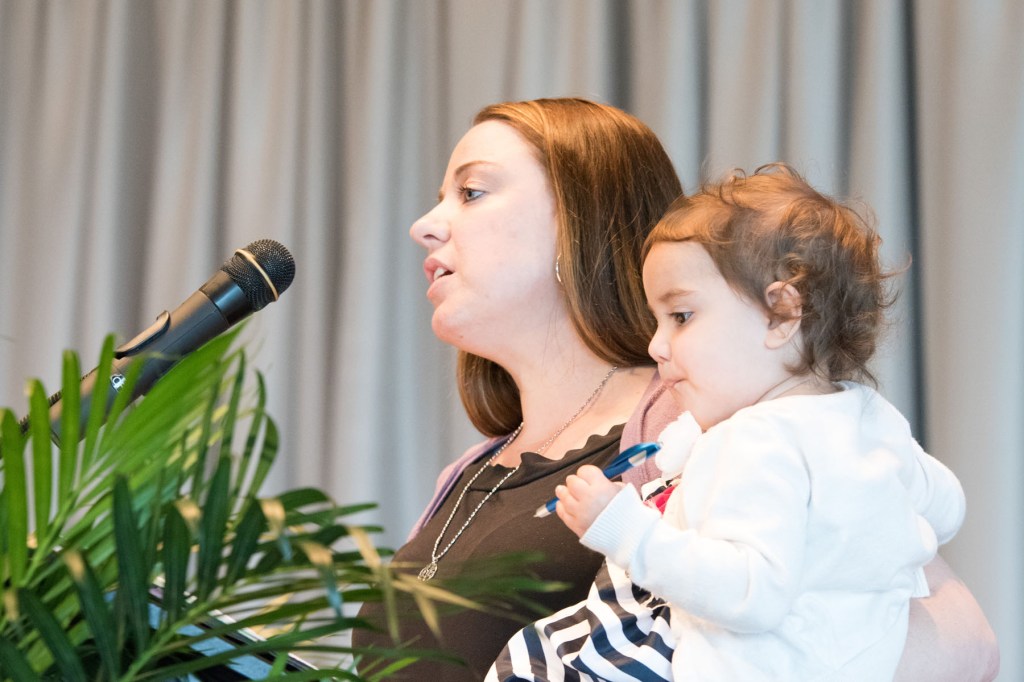 Recipient speaker Stefanie Luna holds her daughter while sharing her testimony about how Oak Mountain Missions has helped her improve her life. (Reporter photo/Keith McCoy)

BIRMINGHAM – Over 500 people gathered at The Club in Birmingham for the annual Harvest of Hope silent auction and luncheon on Tuesday, Sept. 12. According to Harvest of Hope chair Tricia Parks, the event serves as the yearly fundraiser for Pelham-based nonprofit Oak Mountain Missions.

“It’s our only fundraiser of the year. We typically secure one-third of our budget through donations at this event.” Parks said. “Our mission is to provide for families in need in the Shelby County and Birmingham areas.”

Oak Mountain Missions founder Roddy Cooper said this is the 11th year Harvest of Hope has been held.

“We did golf tournaments at first,” Cooper said. “When I approached some ladies on the (Oak Mountain Missions) board, they didn’t know they first thing about golf, but they did know a lot about luncheons. It’s been a success ever since.”

Since it started, Roddy Cooper said he has watched the event grow and more people become involved.

“They seem to be a little bit bigger each year. People have grown to truly enjoy it,” Roddy Cooper said. “They embrace what we’re doing and why we’re doing it.”

Parks said items for the silent auction were acquired from businesses and individuals in the community.

For the luncheon, Shelby County Commissioner Mike Vest served as the keynote speaker and spoke about how nonprofit organizations benefitted him as he grew up.

“I’m speaking about community and how important it is for us to help the young people as they get older,” Vest said.

Montevallo resident Stefanie Luna was selected as the Oak Mountain Missions recipient speaker and gave her testimony of how the organization has helped her after she moved to Alabama while pregnant.

“I needed everything: diapers, food, clothing, help with bills, furniture, sheets, a crib for (my child) Lilly. They helped me with everything I needed and continue to do so,” Luna said. “If you want to see a miracle, look at me. I am supporting myself and my children as a substitute teacher. Even though my bills outweigh my pay check every month, God provides. I am now working on my teaching certification to become a full time teacher.”

Pelham resident Pam Cooper cited Genesis 1:3, “And God said, ‘Let there be light,’ and there was light,” when explaining why she regularly attends Harvest of Hope and donates to Oak Mountain Missions

“Our hearts go out for the people in Houston and Florida,” Roddy Cooper said. “We’re very blessed to be able to have this event.”

According to Parks, proceeds raised by Harvest of Hope will help Oak Mountain Missions provide food, furniture, household items, clothing and financial assistance to families and individuals in need throughout the year.

“It reaches out to people who are experiencing financial difficulties,” Parks said. “It gives them a safety net when they really need it. It provides hope.”