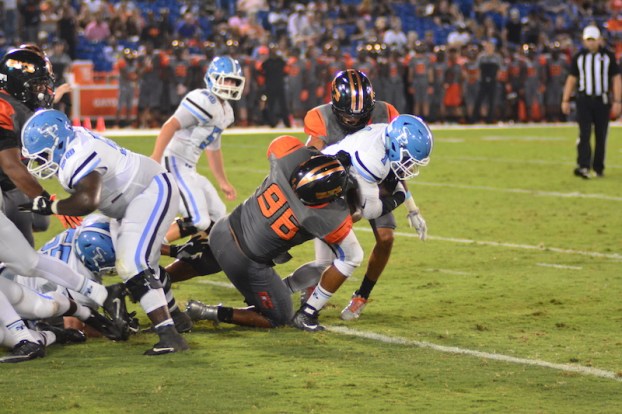 Spain Park fell to Hoover last year after beating the Bucs for the first time, twice, in 2015. This year the Jags are 3-0 and have a legitimate shot to pick up a third win over Hoover. (File)

One of the best weeks of high school football we will ever see in Shelby County is upon us with three top 10 matchups set to take place this Friday night, Sept. 15.

It not only marks an important week of top teams squaring off against each other, but playoff hopes will be on the line with it being the second week of region place as well.

For the second week in a row, all 11 of our teams will be competing in a strong slate of games to be highlighted by our Co-Games of the Week.

Spain Park vs. Hoover (Game of the Week 1)

In the history of this rivalry between the two cross-town schools, Spain Park has only won twice, prompting Hoover to not even consider it a rivalry until the Jags topped them in 2015.

When head coach Shawn Raney came over from Hoover, he changed that attitude when the Jaguars beat the Bucs twice in 2015 on their way to an appearance in the state championship.

Through three weeks of the season, Spain Park has looked like the most complete team in the state giving up just 13 points per game and scoring just under 35 per game. They’re 3-0 overall and 1-0 in region play, while Hoover brings in a 2-1 (1-0) record after taking down Mountain Brook 31-21 this past Friday night.

While the defense was the concern for Spain Park coming into the season it is much better than expected and even better than last year’s team. The only reason it’s difficult to pick them in this game is because of the youth up front on both sides of the ball, which Hoover always seems to control. That being said, this is Spain Park’s year to pick up win No. 3 over the Bucs. Spain Park 28 Hoover 24

Briarwood vs. Wenonah (Game of the Week 2)

It’s the rematch of all rematches between these two teams on Friday night. They’ve only met on the field twice in history, both of which came last year in thrilling one possession games.

Briarwood took game one a season ago 15-14 on the road, before Wenonah came back and won 15-8 at the Lions’ place in the semifinals of the playoffs. Now, here we are again as these two teams are by far the best in the region and two of the best in 5A.

Briarwood has the perfect offense to win a low-scoring defensive battle, and combine that with home field advantage and the determination to mend last year’s broken hearts — I just can’t see the Lions losing it again. Briarwood 17 Wenonah 10

Our third top 10 matchup of the week will feature Mountain Brook and Thompson. The Spartans are 8-1 in the last 10 games played in this series, but the Warriors look to be threat to everybody this year.

Thompson had a record-setting offensive performance in a 63-22 win over Tuscaloosa County this past Friday night putting up 60-plus points for the first time since 70 in 2004.

The Warriors had 500-plus yards of offense in the win to move to 2-0 overall and 1-0 in region play. Now, behind quarterback Taulia Tagovailoa—who already has six touchdowns and 658 yards passing through two games—Thompson will look to improve to 2-0 in region play against Mountain Brook this Friday night.

The defense still has some work to shore up, but is improving and still has potential to be the best in the state. With the offense not missing a beat through two weeks and getting even better this past week, I don’t see the Spartans coming out of Larry Simmons Stadium with a win. Thompson 38 Mountain Brook 20

Oak Mountain is off to a 3-0 start for the third time in school history and is the better team in this game. Vestavia is struggling offensively, while Oak Mountain’s defense is its strongest aspect.

If the Eagles play up to their capability they could win this one going away, but being on the road with two good defenses makes for a closer matchup. That being said, Oak Mountain will soar to a 4-0 (2-0) start. Oak Mountain 24 Vestavia 13

Pelham was able to bounce back after losing a heartbreaker to open the season against Homewood and now, in Week 4, the Panthers will need to do it again.

After falling 35-28 to Benjamin Russell in the final two minutes, Pelham gets rival Helena this Friday night. The Huskies are coming off a 20-0 win over Chilton County to improve their region record to 1-0, while the Panthers are 0-1.

It’s an important game for playoff hopes and while the Huskies have redemption on their mind after last year’s 29-22 loss on their home turf, Pelham is just a slight bit more talented this year and should win a close battle in the fourth quarter. Pelham 21 Helena 17

Chelsea finally showed some promise offensively last week putting up 22 points, but most of it came with them already down big. This game starts a key two-game stretch that could determine their playoff fate. Chelsea 14 Benjamin Russell 27

Calera finally put it all together against Dallas County this past Friday night in a 53-7 win looking much more balanced offensively. On the defensive side, the Eagles haven’t given up a touchdown in six consecutive quarters.

This team is finally playing like one of the best teams in the county and gets an 0-3 Tuscaloosa County. Calera should be able to handle this one with ease. Calera 45 Central-Tuscaloosa 6

Shelby County is a lot better than they looked in a 56-21 thumping handed to them by St. Clair County, especially on the offensive side of the ball. They’ll have a chance to rebound against a sub-par Moody team, but the Wildcats need to show a lot of improvement with their toughest games still ahead. Shelby County 27 Moody 21

Montevallo is in a very similar boat to Shelby County after falling 51-6 to American Christian Academy. They’re so much better offensively and defensively than they showed. Luckily for the Bulldogs, they get a non-region game against 0-2 B.B. Comer this week that should give them a chance to fix some problems. Montevallo 31 B.B. Comer 14

Vincent started the season 1-0 for the first time since 2013 and got to face the defending and undefeated region champ from a season ago in LaFayette. The Yellow Jackets had a chance, but fell 24-8. This week, they get the team that finished second a season ago and is better than LaFayette this year. Vincent most likely won’t win, but after this week, they can reel off several in a row. Vincent 14 Lanett 31

By ALEC ETHEREDGE | Sports Editor LAFAYETTE – What is starting to look like a completely different and improved team... read more