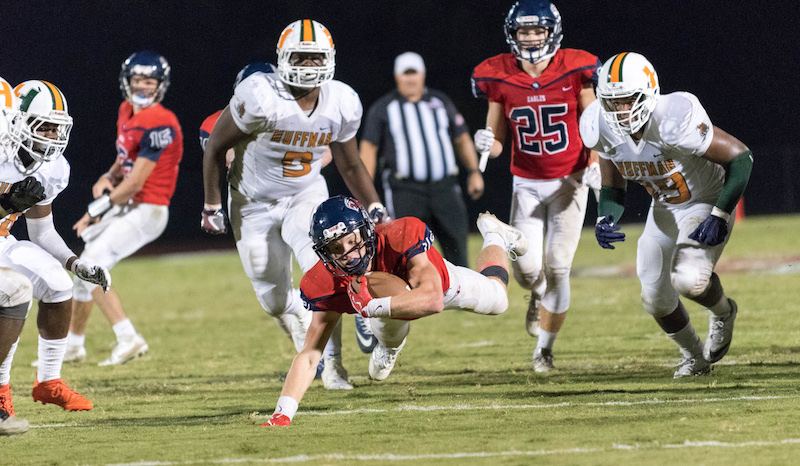 Oak Mountain jumped into the top 10 this week for the first time since Week 1 of 2015 thanks to its third 3-0 start in school history. (Reporter Photo/Neal Wagner)

Through the first two weeks of the season, the ASWA poll remained the same for many of the classifications, especially with regards to the four teams ranked from Shelby County, but the most recent rankings released on Tuesday, Sept. 12, brought an abundance of change.

While a couple of teams in Briarwood and Thompson remained in the same spot at No. 1 in Class 5A and No. 3 in Class 7A, respectively; changes were ample for Oak Mountain, Montevallo and Spain Park.

Starting with the big news, Montevallo fell out of the 3A top 10 after a 51-6 thumping handed to them by American Christian Academy.

The county did, however, still have four teams ranked this week thanks to the addition of the Oak Mountain Eagles, who made their way into the 7A top 10 for the first time this season. It marks the first time the Eagles have been ranked since Week 1 of the 2015 season.

With Oak Mountain now making the jump into the top 10, all three 7A teams from the county are featured in the top 10 with Thompson at No. 3 and Spain Park at No. 6.

Spain Park was the other team to improve its ranking after sitting at No. 7 in the preseason as well as the first couple of weeks during the regular season. Despite looking like the county’s best team, the Jags still sit behind a one-loss Hoover team as well as Central-Phenix City, Thompson, Hewitt-Trussville and McGill-Toolen.

The Jaguars will get their chance this week, however, to prove they are a legitimate contender when they take on the Hoover Bucs. Sitting at 3-0 with solid wins over Gadsden City, Muscle Shoals and Vestavia—two of which were on the road—if they take down powerhouse and cross-town rival Hoover, the Jags will establish themselves as the best team in the state.

Thompson is also still sitting pretty at No. 3 with a 21-20 win over Hapeville (Georgia) Charter and a 63-22 win over region foe Tuscaloosa County. The Warriors also have another big top 10 matchup this Friday night as they play host to No. 10 Mountain Brook.

Briarwood still sits atop the 5A standings, but they, like Spain Park and Thompson, have a tough matchup this week as well. The Lions will square off against No. 5 Wenonah for a top 5 showdown in a rematch of last year’s semifinal matchup that the Dragons won 14-8.

The two teams are 1-1 all time with both matchups coming last season as the Lions won the regular-season game 15-14, which led to an undefeated region championship for Briarwood.