Showcase of Bands rescheduled for Sept. 26 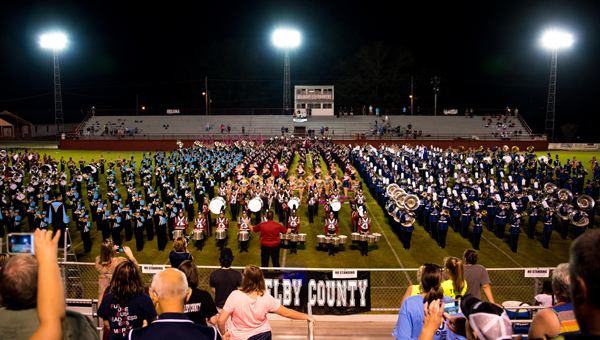 Seven marching bands from schools across the Shelby County Schools system will perform at the annual Showcase of Bands. (File)

NORTH SHELBY – Due to nasty weather conditions resulting from Hurricane Irma, the annual Shelby County Showcase of Bands originally scheduled to take place Sept. 12, has been rescheduled to a later date.

The event, which allows residents to hear seven local bands in one night at one location has been rescheduled for Tuesday, Sept. 26, at Heardmont Park.

“It’s a rare opportunity to be able to watch seven great halftime shows back-to-back like that,” said Travis Bender, associate director of bands at Oak Mountain High School, which will host the event this year. “Most Friday nights, you only see two bands.”

The first band will take the field at 6:45 p.m., and other bands will follow every 15 minutes. Each high school band that is part of the Shelby County Schools system will perform its halftime show.

“At the very end we have a mass band performance,” Bender said. “We get everyone on the field, and it fills up the whole field and we play ‘America the Beautiful,’” Bender said.

The event should conclude by 9 p.m., Bender said.

The Showcase of Bands has traditionally been hosted on a rotating basis by five schools in the Shelby County Schools system that have stadiums large enough to accommodate the event.

However, Oak Mountain and Helena have begun alternating host responsibilities because the two schools’ stadiums allow for plentiful seating and viewer-friendly perspectives.

Tickets for the event can be purchased at the gate for $7, with proceeds being collected by the Shelby County Band Directors Association for the benefit of all bands in the county.

“The money people spend to see the bands goes right back to the bands,” Bender said.

Parking will cost $5, which will be collected by the host school.

The best seats on the home side of the stadium are reserved for spectators, Bender said.

Below is a list of the themes of the shows to be performed at the Showcase of Bands, along with estimated start times: