‘Houndstooth’ helps dogs get their game on

Football-viewing is a family affair around the Wilstach-Plott house, and by that I mean that no one is allowed to be out of uniform on game day.

That includes the dog, too. And just to make sure he is fully in the spirit I take him to “Houndstooth Inn” a few days before the opening game. Rhonda Peel and Melissa Kelley wear houndstooth-plaid aprons and red and white shirts while they make Barney and dozens of other canines ready for game day. 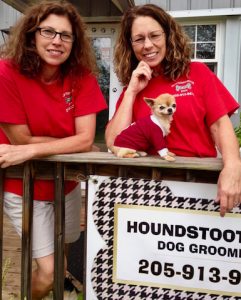 Barney comes home wearing a Bama scarf and a self-satisfied grin. He is a rescue dog, but after a mani-pedi, a tooth-brushing and a shampoo, he forgets all about those bad days in the barn in Wilsonville and the sad rejections as he repeatedly was passed over at the county’s animal shelter … at least he was passed over until I arrived and decided a black and tan terrier was just what our family needed.

Barney gets groomed more often than once a year, of course, but that first visit for football season is special.

Rhonda and Melissa cuddle him and tell him “Roll Tide!”

Caveat: The women welcome Auburn dogs, too, and they will even send them home in little orange and blue scarves … but don’t expect any enthusiastic “War Eagle” shouts.

The real name of their place is “Serenity Farms,” but the grey building behind the grey brick bungalow is the “Houndstooth Inn.”

The business partners came to the boarding and grooming of dogs by very different routes.

Rhonda “knew my dog breeds before I knew my alphabet.” Melissa arrived at dogs via the corporate world.

“I was in banking for 25 years,” she said, “and one day I realized that I was tired of chasing what they wanted me to chase—money. I wanted to do something that I wanted to do.”

While Melissa trod the banking treadmill, Rhonda was showing and grooming dogs. They first went into business together at Fox Valley in Helena, but then they found Serenity Farms during an estate sale in 2012.

Keeping the “Fox Valley” name led to confusion, Rhonda said, mainly because Serenity Farms is closer to Montevallo than to Helena. It is on Shelby 22, just about a quarter of a mile from where Shelby County 17 makes its northward turn at Jones Country Store. On July 1, 2015, they changed the business’s name officially to “Houndstooth Inn.”

Besides the two women, three dogs and a cat are permanent residents. Madison, a lab mix, is 9 years old and has her own Tide cheerleading outfit. Shelby is a 13-year-old chihuahua and dachshund mix, and she has her Alabama collar and bandana.

The undisputed quarterback, however, is Sachi, a 10-year-old chihuahua with attitude and a crimson and white football jersey. Shiney, an 18-year-old cat, patrols the premises and rounds out the menagerie.