COLUMBIANA – A 20-year-old Shelby County man has been charged with arson after attempting to set fire to a hotel room he shared with his mother. 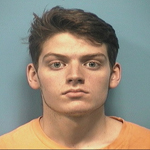 Joseph Albert Dalessandro, who lists an address off Narrows Drive in North Shelby County, was arrested by Hoover Police, according to court records.

On Aug. 19, Hoover Police Department officers were dispatched to Homewood Suites in Inverness on an emergency medical call, according to the bond recommendation in the case.

Police and accompanying medical personnel found the defendant to be exhibiting symptoms consistent with drug withdrawal, and it was determined Dalessandro had an outstanding warrant from Jefferson County.

Officers observed partially burned curtains and carpeting in the room Dalessandro was sharing with his mother.

Hotel management attributed the damage to the room’s current occupants, according to the bond recommendation.

“Defendant made statements admitting that he had set fire to the curtains due to his being angry with his mother,” the bond recommendation reads. “Inasmuch as this hotel room was a room adjoining and/or alongside of other hotel rooms in a multi-story hotel with many other occupants residing there, the intentional setting of the curtains on fire by defendant represents a clear and present danger to a large amount of innocent people staying and/or working at said hotel.”

At the time of the arson charge, Dalessandro was in jail for an outstanding writ for failure to appear in regards to a pending distribution of a controlled substance felony charge in Jefferson County.

As of Sept. 14, Dalessandro was being held at the Shelby County Jail with a $150,000 bond, which was the recommended amount.

A preliminary hearing had not been set as of Sept. 14.

Showcase of Bands rescheduled for Sept. 26