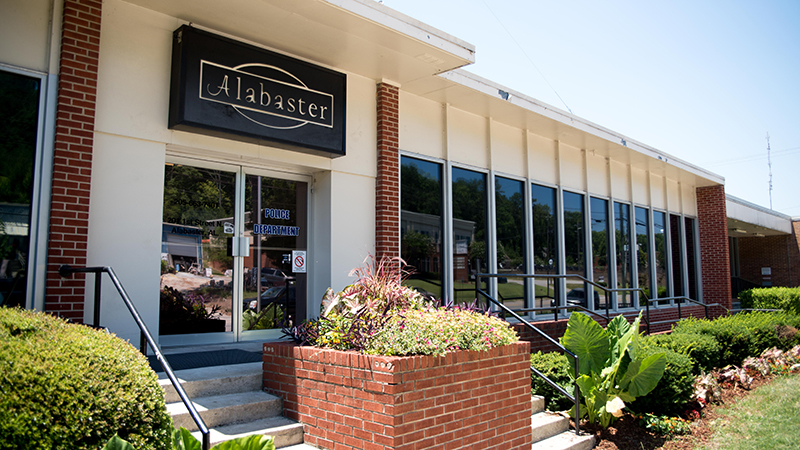 A Birmingham-based architectural firm is wrapping up preliminary design of Alabaster’s new police and court building near the intersection of U.S. 31 and Fulton Springs Road to replace the current police department, pictured. (File)

ALABASTER – The Alabaster Police Department has not received any reports of purse snatching at one of the city’s shopping centers, and is urging locals to refrain from posting such information on social media sites without firsthand knowledge of the situation.

In a Sept. 14 post on its Facebook page, the Alabaster Police Department addressed a recent Facebook post widely circulated throughout local community pages containing an image of a man riding a bicycle in the parking lot of the Publix shopping center off Alabama 119.

The originator of the post claimed the man had tried to grab her purse while she was unloading groceries in the store’s parking lot.

The incident was never reported to the APD, according to the department.

“We have received several calls and messages regarding a Facebook post alleging a possible attempted purse snatching in our city,” read the APD’s post. “We would like to clear up a few things regarding this post. This incident has not been reported to us by the victim therefore we cannot speak to the legitimacy of the incident.”

The department said the post caused a great deal of concern in the city, and encouraged locals to be mindful of sharing unverified information on social media.

“Individuals that posted it without having firsthand knowledge of the incident were irresponsible, as it has caused significant public alarm and was unfair to Publix given the complaint was unverified,” read the post. “Our citizens can rest assured that when a crime is reported in our city, we do our best to hold those responsible accountable.

“We ask that you please refrain from sharing this post as it is continuing to spread information that has not been verified,” read the post.