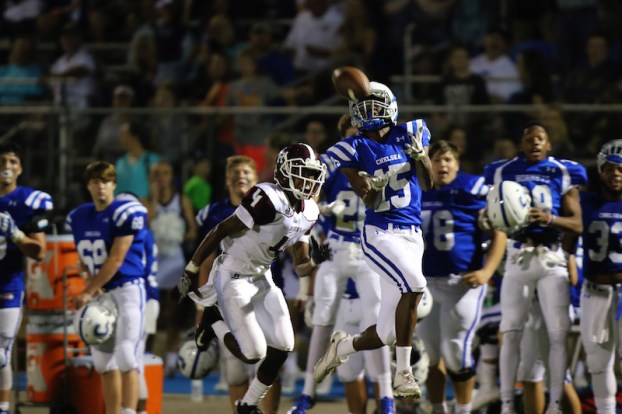 Chelsea was shut out for the first time since 2013 as they fell 27-0 to Benjamin Russell on Friday, Spet. 15. (For the Reporter/Cari Dean)

CHELSEA – It’s been a slow start to the season for the Chelsea Hornets as they’ve been searching desperately for playmakers to replace 90 percent of last year’s offensive production, but have come up empty handed. On Friday, Sept. 15, the Hornets hosted a Benjamin Russell team that had gotten off to a flying 2-0 start.

The combination of offensive confusion and a solid Benjamin Russell teams didn’t bode well for Chelsea as they fell to Wildcats 27-0. It marked the first time since a 14-0 loss in 2013 that the Hornets have been shut out in a game.

With the loss, Chelsea fell to 0-4 on the season and 0-2 in region play, while Benjamin Russell improves to 3-0 overall and 2-0 in region play, which gives them a leg up and a solid chance at making the playoffs as they currently sit atop the 6A, Region 3 standings.

The game started out rather slow in the first quarter with neither team showing much in the way of offense, while the defense carried each team, which the Hornets have become accustomed to so far this season.

Benjamin Russell was, however, able to put points on the board rather quickly thanks to special teams. After being forced to a three-and-out by the Chelsea defense, the Wildcats punted the ball away.

The Hornets were set to return the kick, but it was bobbled, which set Benjamin Russell up on the Chelsea 22-yard line. It looked like Chelsea was going to hold the Wildcats scoreless after forcing them into a third-and-17, but instead gave up a 29-yard touchdown pass on fourth down.

After the missed PAT, Benjamin Russell found themselves in front 6-0 in the early going.

The game became a slow defensive battle after that with neither team able to move the ball.

Eventually, however, the Wildcats were able to wear down a Chelsea defense that rarely left the field near the half. They capped off a nice drive with another touchdown to take a 13-0 lead, which they took into the half.

A big story in the first half was that when Chelsea’s offense looked like it was ready to click into gear, they would cough up the football as the Hornets lost three fumbles in the first half alone, which not only put their defense back on the field, but also gave the Wildcats good field position.

Chelsea came out in the second half and didn’t let up defensively and was in the game late in the third quarter still trailing 13-0 as they headed to the fourth and final quarter.

The exhaustion finally started settling in for a Hornet defense that was on the field the entire game and in the first four seconds of the final quarter, Benjamin Russell punched in its third touchdown of the game to take a 20-0 lead.

There was still plenty of time remaining, but the deficit didn’t suit a Chelsea offense not built to score a ton of points. The Wildcats continued a strong defensive game and put the final dagger on the board with just under two minutes to win by the final of 27-0.

Benjamin Russell is 3-0 for the first time since 2012 and has made a strong statement in region play to start the season, while Chelsea will not only continue to search for offensive production, but its first win of the season as well.

The Wildcats will host Opelika next Friday, Sept. 22, in a game that could decide this year’s region champion; while the Hornets take on Pelham in a must win game.

Thompson makes big statement in 40-13 win over No. 10 Mountain Brook

By ERIC STARLING | For the Reporter The Thompson Warriors’ starters extended their scoring streak to 13 straight series.  Over... read more