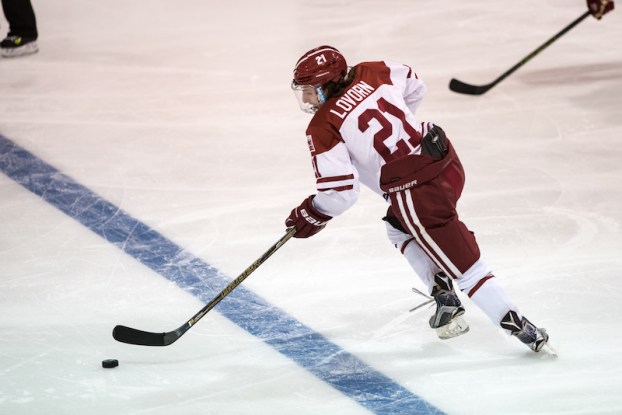 The University of Alabam has named Kyle Richards its fifth head coach in the school’s program. Richards was the associate head coach a season ago for the Crimson Tide. (File)

TUSCALOOSA – Kyle Richards has been named the fifth head coach of the Alabama hockey program, president Jon Lovorn announced on Thursday. Richards rejoins the program after serving as associate head coach last season and spending a short stint over the summer with the Connecticut Nighthawks of the USPHL. Though his announcement has been delayed as the contract was finalized, he has been working with the team since the first week of August.

“We are excited to bring back former associate head coach Kyle Richards as the new head coach for the 2017-18 season,” Lovorn said. “His vision for the growth of our organization and individual player development has us ecstatic for the start of the year. The officer council of Alabama Hockey is confident in his ability to improve players for tasks both on and off the ice.”

In his first season with Alabama, Richards coached the forwards and the power play unit. Alabama ranked sixth in the nation in power-play percentage at 26.09 percent (36-for-138). The team also had the highest single-game goals total in the country and the highest in program history last season with a 21-1 victory at UAB (Oct. 28).

“I want to thank James Benedetto, Jon Lovorn, Dane Sana and the Alabama Hockey family for their work in the process,” Richards said. “I am extremely excited about coming back to lead this group of men. I had a special experience with this group of guys last year and am thrilled they decided to have me back.”

Richards previously coached in ACHA Division-I at West Virginia. Over two years, he coached the Mountaineers to a 21-16-1 record along with an 11-6 mark in conference play. His 2014-15 team made it to the CHMA championship game, and he coached three All-CHMA players in his tenure there.

“I expect this program to continue building on what has been done the past two seasons at the Division-I level,” Richards said. “From coach Quenneville to coach Bierchen, this program has taken all the rights steps toward being a premier program in the ACHA.”

Richards is a native of Halifax, Nova Scotia, but the Canadian moved to West Virginia at the age of 14 with his family. He then attended Castleton University in Vermont where he played collegiate hockey at the NCAA Division-III level.

In 70 games for the Spartans, Richards recorded 30 points on 10 goals and 20 assists. He set a school record with a career faceoff percentage of 72 percent and was part of the winningest class in school history. Richards was named to the ECAC All-Academic team every year of his career. He was named the team’s most improved player for the 2011-12 season and was voted fan favorite in 2013-14.

“Our job now is to not forget what those before us have accomplished, but be willing to go above and beyond to take that next step to greatness,” Richards added. “This team will push each other to be great every day, whether it is in the classroom, the community, the weight room or on the ice. This will be an exciting, fun team of men to come watch.”

Richards and the Alabama hockey program will open the season on the road at Liberty tomorrow, Sept. 15 at 6 p.m. CT. Fans and media can watch live using Liberty’s live broadcast link and follow along with Sam Fleming’s radio call through the team’s Spreaker account, with the link to be shared tomorrow.

By ALEC ETHEREDGE | Sports Editor Through the first two weeks of the season, the ASWA poll remained the same... read more