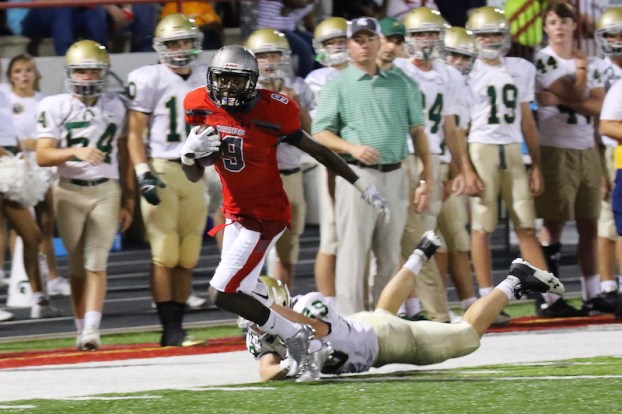 Thompson's Ahmad Edwards sprints by the Mountain Brook defender in the Warriors' 40-13 win. Edwards had his second consecutive 150-plus yard receiving performance. (For the Reporter/Eric Starling)

Thompson makes big statement in 40-13 win over No. 10 Mountain Brook

The Thompson Warriors’ starters extended their scoring streak to 13 straight series.  Over the last two games, the first team offense has scored touchdowns on thirteen straight possessions. Even though the Warriors missed two extra points, the first six series from scrimmage against the Spartans of Mountain Brook pushed them to a 40-0 lead over three quarters in route their 40-13 victory.

Warriors’ head coach Mark Freeman couldn’t have asked for a more balanced attack from his Warriors as the offense put up 256 passing yards in addition to 254 rushing yards. “These young men are doing what we ask of them right now, and it’s really fun to watch,” stated Freeman. “We aren’t where we need to be yet.”

The Spartans weren’t where they needed to be when it came to Thompson junior Shadrick Byrd.  Byrd rushed for the first three touchdowns of the game, scoring from 36, 4 and 2 yards respectively. When the night was over for Byrd, he had tallied 164 yards on 15 carries with four touchdowns. His last touch of the night was a 60-yard jaunt on the first play from scrimmage in the second half for his fourth touchdown.

“Thompson played a heck of game tonight,” Mountain Brook head coach Chris Yeager said. “Their quarterback (Taulia Tagovailoa) made smart decisions all night and throws a laser when he chooses to pass the ball.  We just couldn’t get to him before he got rid of it tonight.”

Tagovailoa scored on a run from five yards out to score his lone touchdown of the night, but he orchestrated the six scoring drives with his 242-yard passing performance.

Joseph Ford scored Thompson’s other touchdown in the first half capping a 79-yard, eight play drive with a nine-yard scamper. He would finish the night with 38 rushing yards.

While Ahmad Edwards didn’t get in the end zone this week, he added to last week’s 165-yard receiving performance with 153yards on 11 catches.

“Our defense had a chip on their shoulder after last week’s game,” Freeman said. “Tonight they came up big giving 100%.”

Jalen Rayan and Myles Brown each intercepted Spartans quarterback Hamp Sisson at critical points of two drives into Warrior territory. Rayam and K.J. Robertson each recorded sacks on Sisson during the contest. Rayam led all defenders with 7.5 tackles.

The Warriors (3-0, 2-0) will hit the road for the first time this season next Friday when they travel to Oak Mountain to face the Eagles.