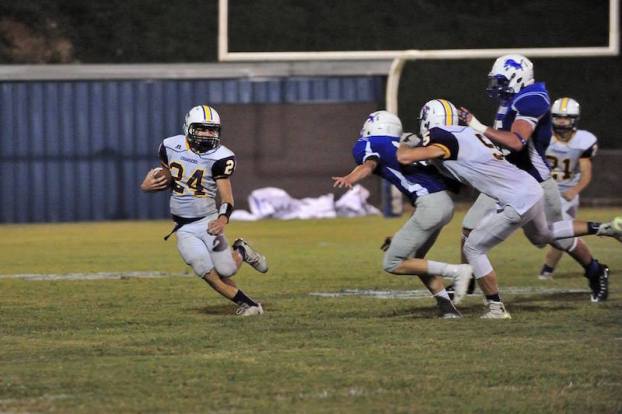 Jake Blankenship looks up field for the open space. He had 423 all-purpose yards in Cornerstone’s 40-12 win over rival Kingwood. (For the Reporter/Larry Dancy)

ALABASTER – It’s been an up-and-down start to the season for the Cornerstone Christian School Chargers, while Kingwood has gotten off to a slow start, but when the two get together on the field like they did on Friday, Sept. 15, all else is forgotten as a rivalry ensues and a region win is on the line.

Kingwood finally showed some promise a week ago in a 43-36 win over Evangel Christian Academy to move to 1-2 overall and 1-0 in region play, but Cornerstone wasn’t ready to let that success continue.

Behind 423 all-purpose yards from Jake Blankenship, Cornerstone was able to put up 40 points in a 40-12 win over the Lions. The win moved the Chargers to 3-2 overall this season and more importantly 1-1 in region play after a big response to last week’s 48-27 loss against Lakeside.

“I think we’re finding an identity and are slowly realizing we can run the ball or throw the ball when we want to,” Cornerstone head coach James Lee said after the game. “It’s taking them a little while to understand, and there’s still some growing to do, but they are really playing well right now.”

A big reason for Cornerstone’s success is the new spread offense they are running in 2017 and while it’s taking some time to get used to, there is a playmaker stepping up each week that puts up big numbers, and this week it just so happened to be Blankenship.

He had a 54-yard and 24-yard touchdown catch for a touchdown and a 54-yard pick six, all three of which helped contribute to his 423 all-purpose yards. Blankenship now has 16 touchdowns through five games.

“He was all over the place,” Lee said of Blankenship’s performance. “I think the loss last week really inspired him to step it up. I think he took it personally and wanted to make sure we didn’t have a repeat tonight.”

Coach Lee said he was pleased with several differnet playmakers in the win from Rhett Garrett at quarterback and the seven guys on the offensive line that he said had their best performance of the season in the win.

“It’s not one guy every week,” Lee said. “It seems like there are different players stepping up every week. I think that’s one thing they haven’t even realized, but it’s an entire team right now. If one guy isn’t doing something there’s somebody else stepping up making a play.”

Garrett ended the night 5-12 for 104 yards, four touchdowns and one interception. Ben Perryman had two touchdown receptions, one for 2 yards and one for 15 yards.

Cornerstone has a bye week before taking on Evangel Alabaster, while Kingwood gets a very good Chambers Academy team on Sept. 22. After that, the Lions will have some winnable games and could end the season strongly.