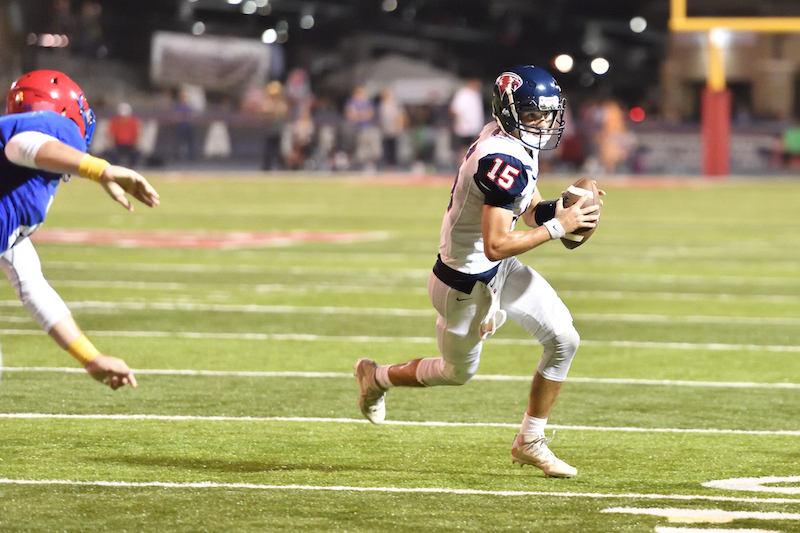 Connor Webb looks for room to run against the Rebels, which there was very little of in the Eagles’ 7-0 loss on the road. (For the Reporter/Barry Clemmons)

VESTAVIA – History wasn’t meant to be for Oak Mountain on Friday, Sept. 15, as the Vestavia Hills Rebels kept the Eagles from starting the football season 4-0 for the first time in school history thanks to a defensive battle for the ages in a 7-0 Rebel victory.

For the next 47:15 of game time, neither team was able to score again despite several good opportunities. The Eagles were looking for history in a 4-0 start for the first time, but the Rebels spoiled that hope as they picked up their first win of the season and moved to 1-1 in Class 7A, Region 3 play.

The loss by Oak Mountain moved their overall record to 3-1, but they fall to 1-1 in region play with several of their biggest games still in front of them.

While the Eagles fell in the contest, they had several opportunities to score, but just never seemed to be able to take advantage of big breaks.

The first of those breaks came in the first half when the defense forced a fumble and set the Oak Mountain offense up near mid field, but the Eagles failed to move the ball down field and left a great opportunity on the field.

Neither team was able to move the ball whatsoever after that lost opportunity by the Eagles and the score ceased to change.

Oak Mountain had the next chance of the game as they were able to get the ball inside the 20-yard line to the 12. Unfortunately for the Eagles, they went backwards at that point as Aaron Brooks lost 5 yards and quarterback Connor Webb lost 4 yards on consecutive plays.

After going for it on fourth and 14 and failing, the Eagles had let a second good opportunity escape them. In a game where points were going to be difficulty to come by, this is something that became costly.

The game was relatively inactive for the next two quarters until there was 7:33 left to play in the game. The Eagles came up with a big defensive stop still down 7-0, but a punt to the 1-yard line pinned them deep in their own territory needing a long 99-yard drive to tie it up.

Oak Mountain was somehow able to put together its best drive of the game, however, despite the poor field position. Thanks to two long passes to Carson Bobo and Ferguson Smith, the Eagles moved the ball into Vestavia territory.

Oak Mountain was able to move rather quickly all the way to the Rebels’ 4-yard line and it looked like they were surely about to tie the game at 7 apiece.

On third and two from the 4-yard line, Ethan Duncan got the ball out of the backfield and powered into the line before the ball was jarred lose. Vestavia was able to pounce on it with 4:47 remaining and as quickly as the Eagles had gotten into striking distance, it was taken away, along with their hopes of moving to 4-0.

Oak Mountain will now have to follow that tough loss up with a game against possibly the hottest team in the county on Sept. 22 as the Thompson Warriors, 3-0 (2-0) travel to Heardmont park for a big region matchup.