Wildcats respond with region win over Moody in OT 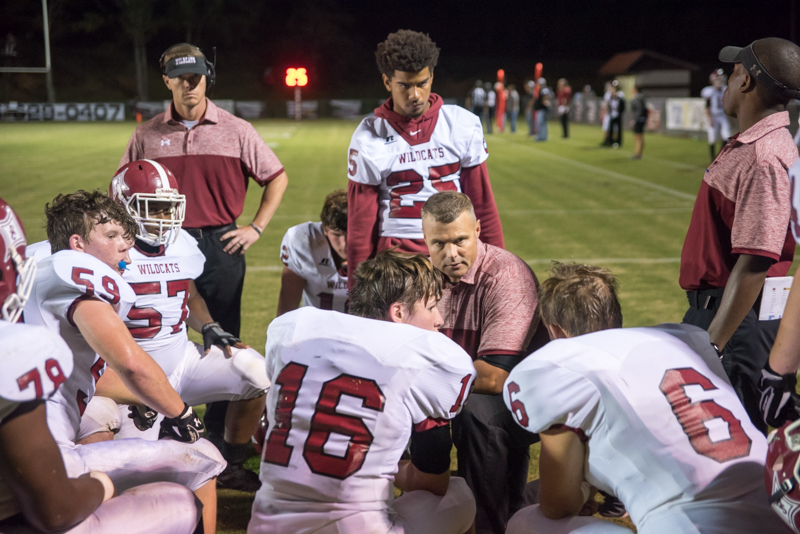 The Shelby County Wildcats came together and responded to last week's tough loss with a 27-21 overtime win against Moody on Friday, Sept. 15. (File)

By RICKY RUSTON | For the Reporter

The tale of the tape will show it wasn’t pretty.  Penalties, turnovers, missed opportunities and points left unclaimed haunted the Wildcats all night.  However, when the dew settled on the field at Papa McCombs Stadium Friday night, the feeling of a hard fought win was the most beautiful feeling in the world for the hometown team.  The Wildcats needed a win and they got a win – a big Class 5A, Region 5 win.

“Not a lot of things have gone well for us.  We have a lot of injuries and we’re having to play a lot of young kids.  It’s not an excuse, it’s just is what it is.  We just don’t help ourselves a lot of times,” Wildcats’ Head Coach Heath Childers said following the win.

“I really like the resolve of this team.  They played hard tonight; they played hard last week.  They don’t quit and they keep playing to the end. I love that about them.  We just have to be smart,” Childers added.

On their opening drives, the Blue Devil picked off a Chadwyn Russ pass and, six plays later, Mitch Nash returned the favor for the Wildcats with a takeaway of his own from Karson Buckner.

Following the Nash interception, the Wildcat offense developed a 13-play scoring drive, starting from their on 19-yard line, that ended with Russ sneaking up the middle for the score from the Blue Devil 1-yard line.  Two minutes into the second quarter, the Wildcats held the 7-0 lead.

After a long kickoff return by Rashaad Clark to the Wildcat 40-yard line, Bucker went to work with a short porch to the goal line.  Buckner connected with Jordan Ransom-Mason on a drag route over the middle on a crucial 3rd and 10 from the Wildcat 18-yard line.  On the next play, Buckner bolted in up the middle from the 3-yard line for the score. Following the point after attempt (PAT), the game was knotted 7-7 with 5:00 to play before half.

On the ensuing kickoff return, the ball is knocked loose from Nash and into the hands of the Blue Devils at the Wildcat 47-yard line.

Buckner quickly connected with Terrance Moore for a 41-yard toss and two plays later Clark goes in from the 2-yard line from under center.  After the PAT, the Blue Devils held the 14-7 lead.

Despite two 15-yard penalties on the following drive, the Wildcats in prime position with 2nd and goal from the Blue Devil 1-yard line with 1:00 left before half.  A botched Wildcat snap had the ball landing into Collin McNeill arms for the Blue Devils.

Coming out of the half, the Wildcats needed favor on their side.  However, the Blue Devil lead would be expanded to 21-7 following Evans hitting the end zone from the 10-yard line two minutes into the 3rd quarter.

The start of the second half wasn’t for the faint of heart for the Wildcat faithful. An opening Blue Devil scoring drive that was then followed by a fumble on offense had the Wildcats reeling for a break.  They needed a spark and Greg Oliver delivered.  Not only did picking off a Buckner pass give the Wildcats the ball at midfield, it likely saved the game.

The Wildcats marched down the field on an 11-play scoring drive that ended with Russ sneaking in from the 1-yard line.  Following a personal foul call, the long PAT was no good and the Wildcats still trailed 21-13 late in the 3rd quarter.

The last drive of regulation is where the young, injured and resilient Wildcat team earned their stripes Friday night.  With 9:30 left, an 18-play drive had been crafted consisting of a personal foul call and a touchdown being negated by another penalty.  Still, Russ found Nash on a rollout for a 15-yard scoring strike heard around Columbiana.  Following the 2-point conversion, the Cats had clawed back 21-21 as regulation ended.

In OT, it was Lamont Bush hitting the scoring stripe from the Blue Devil 1-yard line. Then, his counterpart on defense, Jeremiah Crenshaw, sealed the deal by picking off another Buckner pass.

The Wildcat offense finished the night rolling up 307 yards on the ground with 26 yards through the air.  Russ finished the night rushing for two scores and throwing for one.  Bush collected 142 yards with a touchdown and a 2-pt conversion.  Trent Sullivan added 67 yards rushing on 16 attempts.