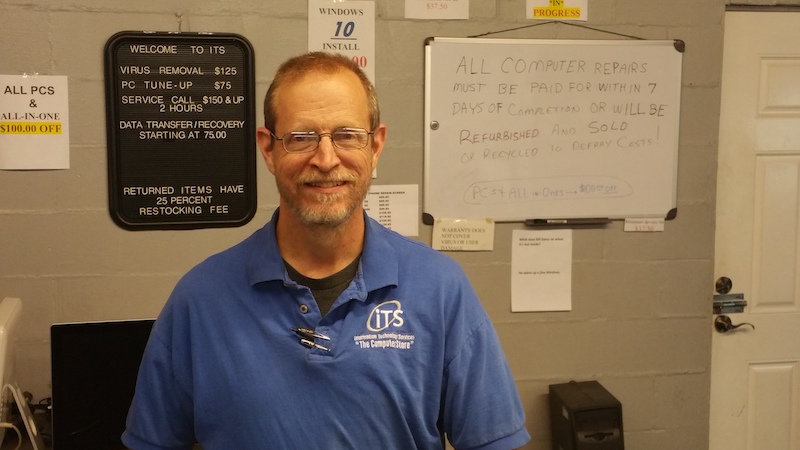 “We found our niche here in Chelsea and North Shelby County,” said Bill Mumpower, store manager for ITS The Computer Store on Shelby County 47 in Chelsea. “No one from Birmingham wants to come over the mountains. And, our customers don’t want to go over there for computer work if they don’t have to. That put us in the perfect place to grow. Add our full range of services and computers and we really have become the Chelsea area’s full-service computer store.”

Standing in their show room full of technology and seeing their menu of services, it makes since why they have grown.

“I lived just above here, up on the hill, when they opened in early summer of ’09,” store tech Chris Brown said. “I enjoy working on computers, so I stopped in and applied for a job. They were just getting open and said they were not hiring yet. Then a week or so later they called and asked me to come in a few hours a week. But, before that could happen, they called back and said, ‘We just need you to come on full time.’”

Brown indicated this story was a good description of the growth of the store’s business here in Chelsea.

“We were next door here in the small add-on area to start with,” Brown said. “We were on top of each other since we only had about as much room as we do now behind the counter here. All we had was four or five computers and desktop repair services.”

They had to expand quickly, but they had practice at that. ITS first started in Columbiana. When they expanded to Chelsea they had so much business here they closed Columbiana and moved the whole operation. The business in Columbiana has recently reopened.

“Customers are surprised at what all we offer,” said Mumpower. “We have machines ranging from basic and economical to top of the line cutting edge. We have expanded sales and services from desktops to laptops, Macs, tablets, cell phones, networking, data recovery and some gaming systems. We offer in-store and in-home service. Whatever our customers are into we try to learn about so when they need help we are ready to serve them.”

“The most rewarding thing about this job,” added Mumpower, “is learning something new every day. The new technologies, continuing miniaturization and viruses all provide an almost daily challenge. But, I want to go beyond the problems customers have with using their equipment; I want to learn how a customer got into trouble in the first place. That way I can help them not have those same problems.”

Mumpower left his career as a pharmacy tech when his part-time job at ITS in Columbiana expanded to full-time, then came to Chelsea with their expansion here.

“Now I have a growing job I enjoy in a growing community where I love the people. I am excited to come to work every day,” he said.