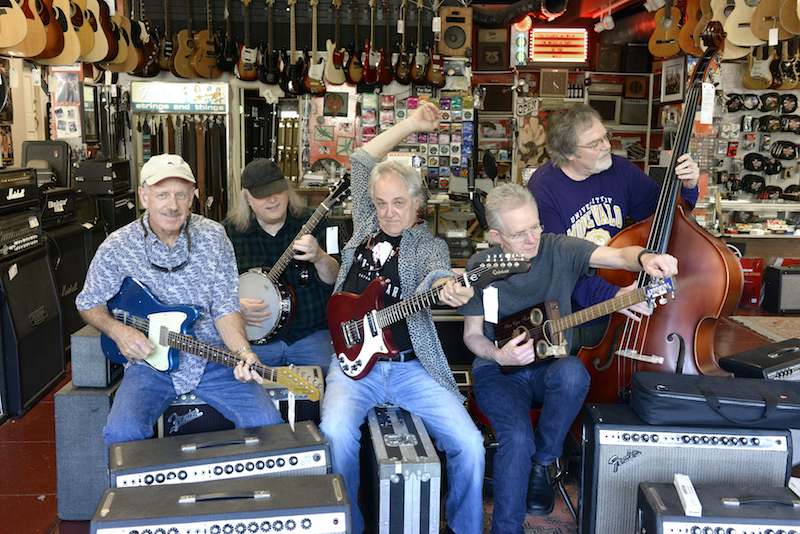 The Dogwood band holds a special place in memory for a certain segment of University of Montevallo alumni … mainly those who count parts of the ’70s as their college days.

For those who recall them fondly, and for those meeting them for the first time, Dogwood is back—a little older, a little grayer, a couple of personnel substitutions, but the same Buffalo Springfield-inspired sound with maybe the added timbre of maturity.

Mark Smith and Don Tinsley sat down with me recently at Main Street Tavern to talk about Dogwood’s storied history and its future since its Sept. 17 CD release party at WorkPlay in Birmingham.

The men fondly recalled the country-rock band’s formation in the dorms and halls of UM. Smith and Tinsley, both with rock star dreams, were playing in different groups and became acquainted like you do in college, meeting somebody who knew somebody else who happened to be a musician and … you get the picture.

Smith, a bassist, was playing with a group called “Daze of the Weak” with Tom Fox (drums) and Doug Lee (guitar).

Tinsley (vocals and guitar) already had something of a musical career—working as a studio musician since he was in high school.

The time was perfect for Dogwood to blossom. There they were on a small campus with a lively arts scene, with sympathetic professors who understood an artist’s obligation to his art. Then they found the house.

“We rented this house in Dogwood from Don Lovelady,” Smith explained. “It was this rickety wood house up on stilts, surrounded by his pasture and his cows. We stayed set up in the living room all the time.”

That way, he explained, if someone came up with a killer idea for a song at, say, 2 a.m., no problem. Everyone in the band lived there except Tinsley, who, nevertheless, spent a lot of his time there. Tinsley lived in Wilton, anyway, so he was never far away.

A house in the middle of a pasture was a perfect place for the birth of a band.  No neighbors were near enough to complain about racket.

That first edition of Dogwood had the late Fox on drums; Lee, guitar; Smith, bass; Tinsley, vocals and guitar; and Dave Miller, piano. Also performing with them and other groups at the time was J.D. Harris, a singer-songwriter. Most of them also played with other bands, including Hotel, The Mortals, Hotfoot, The Primitons and Topper Price and the Upsetters.

The band has held reunions every couple of years. They have mourned the loss of Harris, Jim Liner (bass) and Orville Cain, the band’s second drummer. But this Dogwood is more than just a reunion, Tinsley said. “We were losing too many.”

Dogwood redux features Miller, Tinsley, Smith and Lee, plus Rick Byrd on steel guitar, and, on the CD, Todd Chase plays drums, but he doesn’t consider himself a member of Dogwood—Spinal Tap effect, you know.