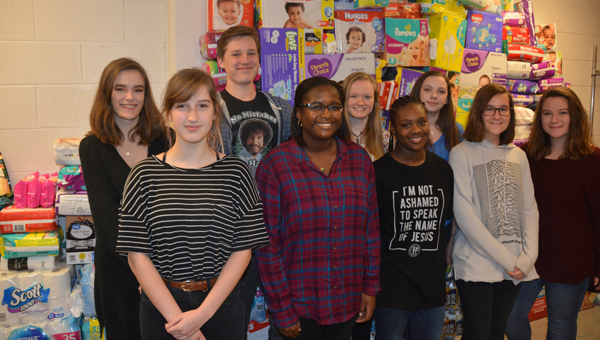 The Thespian Society at Spain Park High School knew how to generate interest in a drive to benefit hurricane victims: competition among classes.

During the “Help for Houston” effort, students dropped off goods in boxes located at the school library and cafeteria.

The items placed in the boxes each day was proof that SPHS students wanted to help, St. John said.

“It’s kind of nice to walk up there and stuff is spilling out of the boxes,” he said.

Items were assigned point values based on their price. A six-pack of bottled water was worth five points, for example, while a roll of paper towels was worth two points.

The class with the highest total was announced each week, and the overall winning class was treated to Kona Ice.

The freshman class won with a total of 1,506 points.

The drive yielded a total of about $4,000 worth of supplies.

Donations were then taken to local relief agencies including Christian Service Missions in Birmingham and the Humane Society.

The idea was generated during a meeting of the Thespian Society, during which St. John asked the group of about 14 students to come up with a way to help those affected by the hurricane.

Senior Thespian Society members Kennedy Baskin and Shanya Blocker said that while their organization developed the idea for the drive and managed it, many others at the school also participated.

“A lot of other clubs joined in and helped out, so it really was a school effort,” Baskin said.

The students said the participation was overwhelming.

“I am very happy,” Blocker said, gesturing to a wall covered up by donations. “Look at this. This is after three days. It shows we actually do care, and I appreciate them caring.”