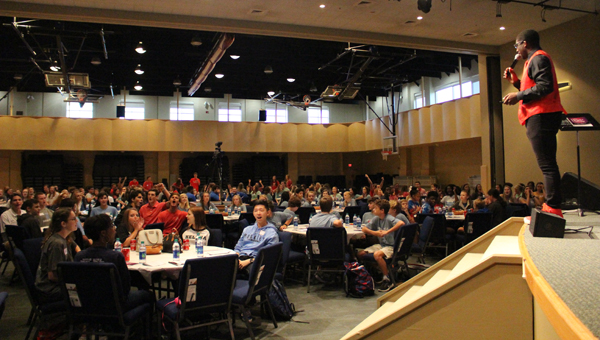 Eighth graders were included in the Shelby County Schools Student Leadership Summit for the first time this year. (CONTRIBUTED)

This was the first year for eighth graders to be included in the event, which has typically included just high school students.

The annual event was inspired by several Oak Mountain High School students in 2013 after they attended a similar event at Auburn University and wanted to find a way to replicate the experience for other high school students.

It is organized by the Oak Mountain Student Government Association and SGA advisor John Milton, who serves as the program director for the event. Since its inception, the event has impacted over 1,500 students.

“Eighth grade is such a crucial year for leadership development,” Milton said. “By being a part of this leadership program as an eighth grader, students are more likely to get off to the right start in high school and begin seeing themselves as leaders. I am excited to see the impact these young leaders will have this year and in the years to come as they enter high school!”

Miller, who has worked with Chick-fil-A since 1978, is also a best-selling author with more than 800,000 books in print.

Students attending the Student Leadership Summit were provided copies of the workbook which accompanies Miller’s book, “The Heart of Leadership, Becoming a Leader People Want to Follow.”

Miller led students through the workbook, which focuses not on leadership skills but on developing the type of leadership character required for service leadership. Those character traits include: “Think Others First, Expect the Best, Respond with Courage, Hunger for Wisdom, and Accept Responsibility.”

Miller used the illustration of an iceberg to help students understand the difference between leadership skills versus leadership character.

Miller said leadership character can be developed and the best time to develop it is when a person is young. He noted that developing character is a process that first starts with the decision to change and then recognizing that it is an issue of the heart.

He stressed the type of leader people want to follow is a servant leader, who is centered on others rather than self.

Miller also stressed that great leaders have to believe in themselves, believe in others and believe in their abilities to influence the future. Leadership also takes courage and without it, it is impossible to lead well.

Finally, Miller said great leaders make it a life-long pursuit to grow in wisdom, seeking both feedback and counsel from their own network of trusted advisors. Great leaders are also willing to accept responsibility, realizing that it doesn’t weaken them as leaders but helps them to grow into better leaders.

More than 450 students from every Shelby County School were in attendance.

One new addition for this year was the inclusion of approximately 30 students from each middle school.