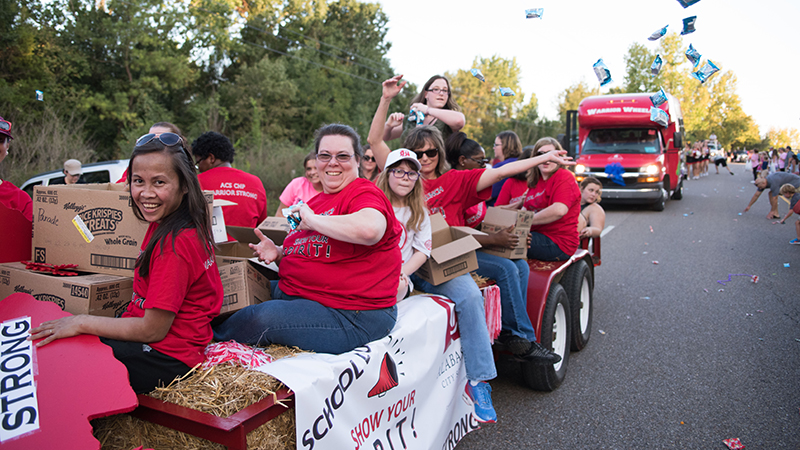 Riders on a float in Alabaster’s 2016 homecoming parade toss candy to the spectators along the parade route. This year’s parade will be on Sept. 27. (Reporter Photo/Keith McCoy)

ACS will hold its annual homecoming parade on Wednesday, Sept. 27, beginning at 5:30 p.m. at Thompson Middle School. From TMS, the parade will travel down Warrior Drive in front of Thompson High School, turn right onto Thompson Road and then turn left on Alabama 119 before ending at Larry Simmons Stadium behind Thompson Intermediate School.

This year’s parade theme will be “Red Hot Warriors,” and will honor the Alabaster Fire Department. Alabaster Fire Chief Jim Golden will serve as the grand marshal, and will ride in the parade’s lead vehicle.

During the parade, each Alabaster school will design a float utilizing the “Red hot Warriors” theme. The parade also will feature the THS marching band and visual ensemble, city youth league football players and cheerleaders and more.

At the pep rally, ACS will award prizes for Best Overall, Best Class Float for THS, Most Creative, Best Use of Theme and Most Spirit.

The parade will come two days before the Warriors host cross-town rival Pelham in the THS homecoming football game. The September matchup will be the team’s second home game of the 2017 season, and the Warriors will look to increase their win streak over Pelham to three.

THS is riding a wave of success so far this season, posting a 3-0 record and amassing an average of more than 500 yards per game through Sept. 19

This will mark the fifth-consecutive community homecoming celebration for Alabaster since the Alabaster City School System formed in July 2013. The past four celebrations have drawn thousands of spectators along the parade route to show their support for the Warriors.