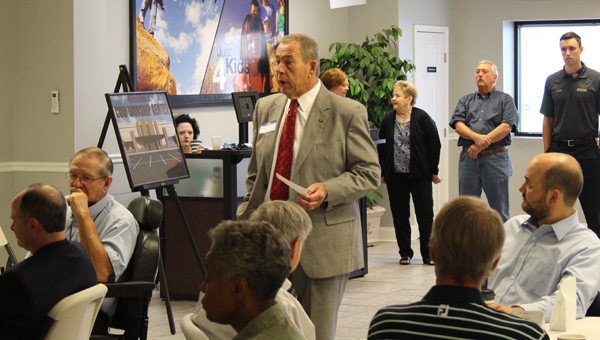 Westover Mayor Larry Riggins speaks during a Coffee with the Mayor event sponsored by the South Shelby Chamber of Commerce on Thursday, Sept. 14, at the ServPro Training Center. (REPORTER PHOTO/STEPHEN DAWKINS)

WESTOVER – Westover Mayor Larry Riggins talked about new homes and old homes in the town during a Coffee with the Mayor event on Thursday, Sept. 14.

The event was hosted by the South Shelby Chamber of Commerce at the ServPro Training Center off U.S. 280.

“I would like for people to say as they drive through, that even though it’s small, that’s a nice city,” Riggins said.

The mayor said the number of building permits granted in 2016 increased from the previous year and that Westover is almost out of developed lots.

Pine Mountain Preserve would likely be a transformational development in the town, but after the 6,000-acre planned unit development was approved several years ago, progress has been slower than expected.

Construction has taken place on some of the development’s amenities, such as boathouses, Riggins said.

The availability of fast, reliable internet service continues to be a problem for residents, Riggins said and added that progress has been made, as most residents now have at least two options for providers.

Westover officials have also worked to ensure high-speed internet can be provided to businesses interested in locating in the town.

“We can provide, one way or another, businesses that want to come into Westover with high-speed internet,” Riggins said.

The 2020 Census will be important for Westover, as officials did not think the most recent population numbers for the town were correct.

“We’re going to try to make sure we have every resident who lives in Westover accounted for,” Riggins said. “It takes a lot of work.”

The Census numbers are important for tax and grant purposes, Riggins said.

Riggins thanked the city employees and officials for their “sense of pride and cooperation.”

“They’ve had an eagerness to help with anything I ask to do,” Riggins said.