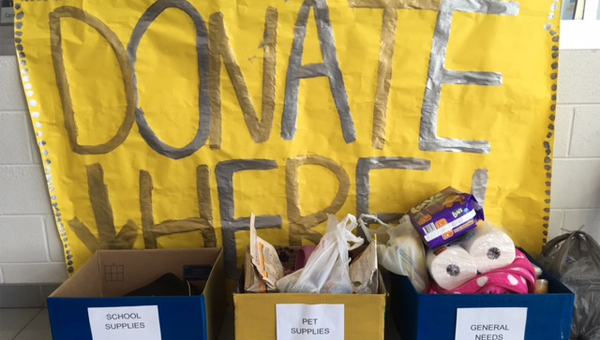 Students at Berry Middle School have been collecting supplies for those affected by hurricanes Harvey and Irma, including school supplies for a high school near Houston. (CONTRIBUTED)

HOOVER – Students at Berry Middle School have been collecting supplies for those affected by hurricanes Harvey and Irma, including school supplies for a high school near Houston.

“All of the students who have worked on this project and/or donated items have been excited to help others in need,” Berry Middle School Assistant Principal Dana Ricks said. “It is really heartwarming to see how happy the kids are to do what they can to help out. Here at Berry, we decided to combine all three causes and collect general supplies for people affected by Harvey and now Irma, pet supplies for the Greater Birmingham Humane Society, and school supplies for Kingwood High School.”

Ricks has a personal connection to Kingwood, Texas, a suburb of Houston, where she lived prior to moving to Birmingham more than two years ago.

“I still have family and friends there,” Ricks said. “The high school my siblings, husband and son attended, Kingwood High School, flooded so badly that the students were moved to another campus for a year. I contacted the principal there, Dr. Ted Landry, and asked if I could help with school supplies.”

Several students at the school approached the administration to see if there were ways they could help with hurricane relief.

“Zoey and Zack Swalley had been volunteering with the Greater Birmingham Humane Society and wanted to collect supplies for adoptable pets that were moved to Birmingham because the Houston Humane Society needed to house pets separated from their owners during the storm,” Ricks said. “I think the biggest impact on our student body has been the emergence of students coming to administrators with ideas to help and working together with other students and adults at the school to make our drive a success. The maturity and compassion of these students is contagious.”

Ricks said members of the Spirit Club made posters to hang around the school raising awareness of the cause under the direction of Spanish teacher Megan Romero. Art teacher Daniela DeLuca worked with several art classes to design and create banners to hang in the school’s front lobby for the donation site, and theater teacher Dianne Rowe worked with students to create a news story to air on the school news program “Jag TV.”

Students Sadie Glawson and Zoey Swalley proposed the initial idea to collection donations also wrote articles for the school’s parent newsletter explaining the school’s efforts to help, and many students have been donating items when they walk in the front door.

“Sophie Glawson was also just accepted into our Peer Helper Program under the guidance of our seventh grade counselor, Ericka Leonard,” Ricks said. “She shared with the other peer helpers what we were doing for hurricane victims. They in turn will go out to all homeroom classes to spread the word.”

Ricks said the school will drop off collected general supplies at the Christian Service Mission at 3600 Third Ave. S. in Birmingham on Friday, Sept. 22.