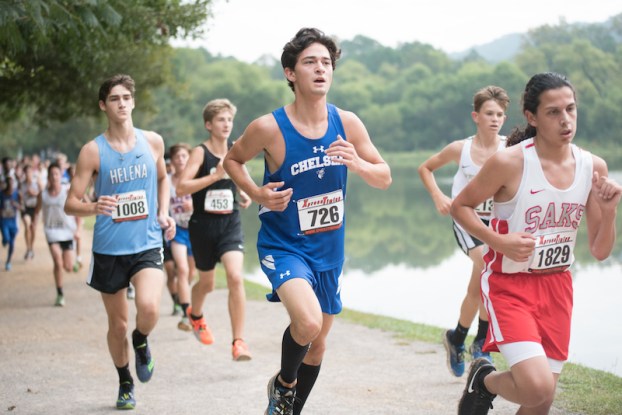 CHELSEA – In its past, Chelsea’s cross country program has had its share of up and downs, but with the community growing and more kids than ever attending the high school, now is the time for the program to take its next step.

With the hiring of new head coach Anthony Marino since last year, that change seems to be coming sooner rather than later.

“I haven’t met one person here that hasn’t welcomed me with open arms,” Marino said. “The genuineness has been unbelievable from everybody in the community and I am so excited to be a part of all of what is going on in Chelsea.”

In his nine years with the Eagles’ middle school program, Marino transformed the cross country teams into something special, which he now hopes to do with Chelsea’s high school team.

“When I first started coaching at Oak Mountain we had 28 kids on the team,” Marion said. “I recently overheard my Chelsea kids talking about how strong Oak Mountain is as a team, which got me to thinking.

“So I sat them down and told them ‘Let’s take a trip back in history; when I got to Oak Mountain we had 28 kids and weren’t very competitive. I charged those first few kids with the goal of helping me recruit and grow that program. They became my ambassadors to help me grow the program. When I left, we had 132 runners in just seventh and eighth grade alone.’”

Marino now has 25 kids on team his Chelsea team right now and said his message was to make sure they realize, that they too can be the start of something big like his kids at Oak Mountain were.

“This is a great group of kids like that first year at Oak Mountain,” Marino said. “It turns out to be a numbers game. We are trying to get the word out and make sure our program grows like that. We have places to run and kids with talent, so growing something big is the main goal.”

Marino got the opportunity to become a high school coach for the first time when he was offered a job at the middle school to become a sixth grade science teacher.

“The opportunity just landed in my lap,” Marino said. “I came by the school and fell in love with it, but the very next question out of my mouth was ‘What opportunities do I have to coach.’”

It just so happened that at the exact same time, principal Wayne Trucks at the high school was looking for a new cross country coach to run the program.

“If God gives me an opportunity like that I’m going to say yes,” Marino said.

Marino did say the jump to the high school ranks of coaching made him slightly nervous considering he had never done it before, but a good friend and former co-worker of his helped him through the nerves.

“I always said I would make a great cheerleader for a high school team, never knew if I’d make a great coach,” Marino said. “I was definitely nervous, but then I talked with coach (Michael) Zelwak over at Spain Park.

“He said ‘What I have is what you have and I will give you everything you want.’ He gave me a ton of pointers on what to read and do, and how to make plans. I started doing what he said and now I at least have a beginning and a plan to follow, so the nerves have calmed.”

Now, Marino is two events into his first year as the high school cross country team at Chelsea and is already seeing drastic improvement in his teams.

In the first event of the season, the Chickasaw Trails Invitational on Saturday, Sept. 9, 90 percent of the Chelsea Cross Country teams set a personal record to start the season.

Chelsea’s boys went on to finish 34th at that event as a team. Chelsea’s varsity squad followed that up a week later on Saturday, Sept. 16, with a trip to the Spain Park Cross Country Classic where the girls finished 13th and the boys 17th to continue the improvement.

“I love these kids and knew if I loved them enough, then I would be doing right by them and coaching them to the best of my ability,” Marino said. “Our goal this year is for both women’s and men’s teams to make it to state. Last year just the women made it, but this year the goal is to get both to that point.”

Though it will take a while for drastic improvements to be shown, Marino brings a background of building strong middle school programs at Spain Park and Oak Mountain, where he coached under two of the best varsity coaches in the state in Zelwak and Jim Moore.

“The kids are buying into being a family and that’s the big thing,” Marino said. “They’re a wonderful group that are becoming a strong family. I go home every day and I walk in to my wife and say ‘Let me tell you a little story’ with a grin on my face and she knows I’m just genuinely happy with what I’m doing. I’m excited to see what I can do for Chelsea.”